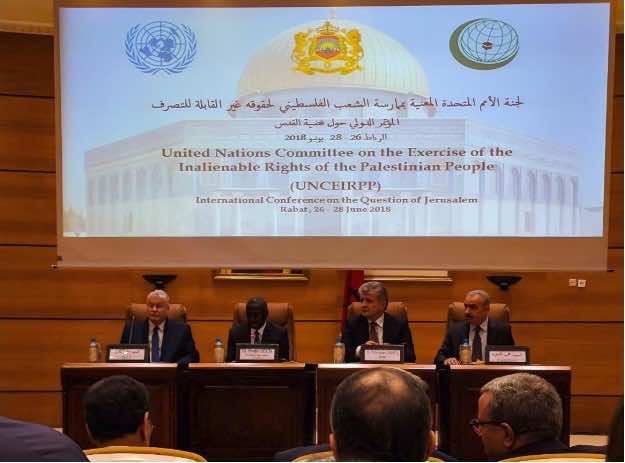 Rabat – The International Conference on the Question of Jerusalem in Rabat concluded Thursday evening, June 28, after two days of discussions from Palestinian, Israeli, and international experts as well as youth from East Jerusalem.

Representative of Palestine, Ambassador Riyad Mansour, expressed his gratitude to the Kingdom of Morocco for its hospitality, noting, “His majesty [King Mohammed VI] set the right course for this conference,” on Tuesday with his opening letter.

“What we need is peace and to diffuse the situation. We do not need a massive rupture on religious ground in Jerusalem because that will be catastrophic for all of us.”

“This is the year we have to double our efforts.”

The conference opened Wednesday, June 27, with a statement from UN Assistant Secretary-General for Political Affairs Miroslav Jen?a on Israeli settlements: “Ongoing settlement construction and expansion in the occupied West Bank, including East Jerusalem is a major obstacle to peace. It is illegal under UN resolutions and international law and must be halted and reversed.”

In the first plenary panel, experts had harsh words for Israeli and US policy.

Abdallah Siam, Deputy Governor for Jerusalem, argued that Israeli policies aim to push Palestinians out of Jerusalem. He referred to policies based on principles such as strengthening the Jewish character of the city, the growth of Israeli settlements, and the occupation of Palestinian lands.

In the same panel, Lara Friedman, representative from the Foundation for Middle East Peace, spoke about the effects of the move of the US embassy to West Jerusalem from Tel-Aviv. According to her, this action seems to have been intended to end the question of Jerusalem unilaterally – albeit unsuccessfully – and that such a move diminished the chances of the US acting as a sponsor of the Middle East peace process.

However, she added, “I’ve never seen so many people focusing on Jerusalem… the unintended consequence for Trump’s move is that the world is paying attention.”

He added that the current US administration did not understand the realities on the ground, and that solving the question of Jerusalem requires a valid Palestinian State. “That is the essence of occupation – not being able to control your own life.”

Amneh Badran of Al-Quds University, in accordance with Siam, stated that Israeli policies aimed at pushing Palestinians out of Jerusalem are an effort to change the city’s demographics through land-grabbing by military force and occupational laws.

Urging for resistance, she added, “Supporting people on the ground is the most important. If we don’t have something done to change the balance of power on the ground, the Palestinian presence in this city is threatened. We need to insure that Jerusalemites remain in Jerusalem.”

Badran also called for investment in key sectors such as education, health, and youth programs as part of a partnership between international donors, governmental and non-governmental actors in order to enable Palestinians to remain in Jerusalem.

‘It’s not a conflict. It’s an occupation.’

In the second plenary panel, Ziad Abuzayyad, former minister for Jerusalem Affairs, reviewed a number of related UN resolutions, and found that the “United States of America transferred its embassy to Jerusalem in violation of all of the international resolutions,” and “the Israeli claim to sovereignty over Jerusalem has no basis in UN General Assembly Resolution 181.”

He also questioned the term “Israeli-Palestinian conflict” saying it should be removed from the general vocabulary and replaced with “Israeli occupation of Palestinian lands.” He asserted, “It’s not a conflict. It’s an occupation.”

Moshe Amirav of Hebrew University insisted that Jerusalem is a city for everyone, and that he hopes the conflict can be resolved to return Jerusalem to the City of Peace – as it is named in the Bible.

Coming of age under occupation: Palestinian youth in East Jerusalem

In the third plenary, Shoroq Nammari, one of the youth from East Jerusalem who works for Palestinian Vision, talked about the struggle of residency and citizenship for Palestinians. She expressed the fears of Palestinians in Jerusalem that their residency can be revoked at any time for unprecedented reasons, declaring that “those who do not express their loyalty to the occupation should not be punished.”

“We will continue to resist until we establish a Palestinian state and our rights to self determination have been attained,” she added.

Ali Ghaith, a freelance journalist, spoke of the poor educational systems in place for Palestinian youth in Jerusalem. He explained that the cheapest and most well-equipped schools are the Israeli schools. Many Palestinian families can only afford to send their children to Israeli schools, where the aim of the “Israeli curriculum is to erase the Palestinian nationalism from the minds of young people.”

Sami Mshasha, speaking on behalf of the United Nations Relief and Works Agency for Palestine Refugees (UNWRA), also spoke of the occupiers’ attempts to “Israelize” the minds of Palestinian young people.

Palestinian rights in the international community

In the fourth and final plenary, Mohamed Salem Cherkaoui, of Rabat’s Bayt Mal al-Quds Al-Sharif, gave a brief history of Moroccan-Palestinian relations which began over 800 years ago. “Moroccans have thereby become the trusted neighbors of the Jerusalemites and Palestinians and these links have been upheld over time.”

A representative from the Turkish Ministry of Foreign Affairs, Ufuk Ulutas, noted that the situation is not being helped by the US. “The US has chosen to be part of the problem instead of part of the solution.” He added, “Any deal that is short of making East Jerusalem the capital of Palestine cannot and will not work.”

Roberto Valent of the UNDP said the situation could not continue as it is now and urged for more efforts on the ground. “We cannot ask populations to remain in positions that require humanitarian assistance.”

At the conclusion of the conference, Fouad Akhrif Mofa, speaking as a representative of Morocco, stated, “The success of this conference was a result of the prominence and knowledge of the expertise from various nations.”