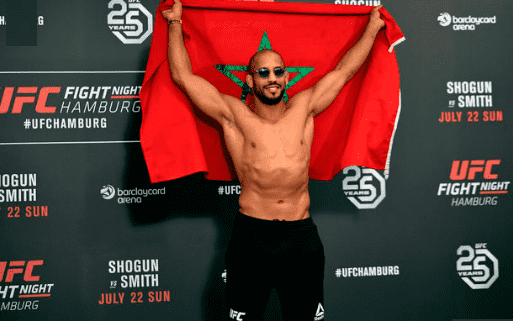 Azaitar made an unforgettable debut, defeating his rival with extreme aggression and strong punches.

The crowd chanted his name and carried Moroccan flags along the three rounds of the fight.

When he heard his name after the third round, the champion bent on his knee to pray. Azaitar then addressed a special thanks to his fans worldwide and Morocco.

“I would like to thank my King Mohammed VI who supported me…. thank you daddy, thank you mother. Long live the King; Allah akbar,” shouted the champion.

Azaitar had high expectations for the fight. The Moroccan star told German media before the fight that he is “faster” than his Brazilian rival.

Miranda recognized that his loss would result in the end of his career at the UFC.

“Inevitably, if I lose, they will cut me,” Miranda told MMAjunkie. “I need to win.”

With Azaitar’s win,  it seems that Miranda’s career has come to an end.

Recently, Abu Azaitar shared several photos with his social media followers, asking them to support him in the fight.

On Friday, Abu Azaitar shared on Instagram that he is “ready for the war.”

On Saturday, Azaitar shared a picture of himself and his rival at the pre-match press conference.

Abu Azaitar signed with UFC in 2017, becoming the first Moroccan to fight with the US MMA organization.

Besides support from thousands of Moroccan fans, Abu Azaitar also has the support of King Mohammed VI.

Recently, several photos of King Mohammed VI and Abu Azaitar went viral on social media. The King received the champion and his two brothers, Ottman and Omar, for f’tour during Ramadan.

The Azaitar brothers posed for several photos with the King and expressed their pride and joy for meeting the monarch.