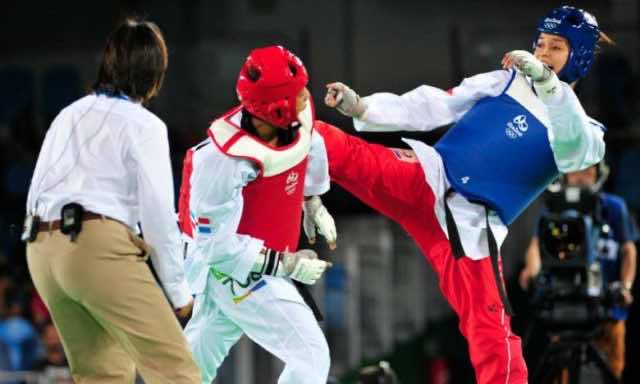 Rabat – Moroccan women once again stole the spotlight with a third-place finish at the World Taekwondo World Cup Team Championships this weekend in Wuxi City, China.

The Moroccan women’s taekwondo team displayed their eloquent yet powerful skills in the Korean martial art by winning their first match against the Ivorian selection by a substantial amount (8-77). The team’s second match against the South Korean team, although difficult, ended in Morocco’s favor (51-50) but the semi-final fight went to the Chinese, who snatched the gold medal win.

In contrast, the Moroccan men’s team was eliminated within the first round. Their brief victory against Côte d’Ivoire (110-78) ultimately led to a frustrating loss against South Korea (48-94).

Taekwondo is a grueling and strenuous Korean martial art characterized by self-defense principles, the art of concentration, and the theory of power. Reaction force, equilibrium, mass, speed, and breath control is all taken into account as head-height kicks, jumping kicks, spinning kicks, and fast kicking techniques are all emphasized in the competitive point-by-point system.

Earlier this year, the African Taekwondo Championships were not only held in Morocco but dominated as well by the host nation. The Moroccan team won four gold medals at the Inbiaat Sports Hall in Agadir—three of the medals were earned by Moroccan women.

Further, the African Championships in March significantly highlighted the influence of the Moroccan women’s team during the under-73-kilogram match. The gold medal win by Chaimae Kriem displayed her resilience in the women’s taekwondo selection as she defeated the Rio 2016 Olympic bronze medallist, Hedaya Malak of Egypt.

Throughout the last few years, the Moroccan women’s selection has taken the Korean martial arts’ world by storm as they repeatedly exhibit their power and influence by frequently placing within the top three positions.

The Moroccan women’s third-place victory at the World Championships, which ended over the weekend, was achieved by the selection composed of Ouiam Dislam, Oumaima Elbouchti, Nada Laaraj, and Ouafaa Elaatri.