Rabat - The newly-appointed Moroccan economy minister, Mohamed Benchaaboun, has made a successful career in banking and finance in Africa.

By
Tarek Bazza
-
Tarek Bazza is a journalist at Morocco World News with Master’s degree in Translation from King Fahd School of Translation in Tangier.
Aug 21, 2018
Spread the love

Rabat – The newly-appointed Moroccan economy minister, Mohamed Benchaaboun, has made a successful career in banking and finance in Africa.

Since February 2008, Benchaaboun has served as CEO of Morocco’s Central Popular Bank (BCP), a position he was appointed to by the King.

In 1984, he graduated from Telecom ParisTech (ENST), a public institution of higher education and engineering research in France.

Benchaaboun began his career at Alcatel Alstom Maroc as director of development strategy and management control. He then became industrial director at the same company, overseeing 5 plants and 800 people for about 10 years.

Benchaaboun previously held a position within the Ministry of Economy and Finance as director of the Administration of Customs and Indirect Taxes between 1996 and 1999.

He joined BCP for the first time in 2001 as deputy director general.

He served in the position until 2003 when the King appointed him as director general of the National Telecommunications Regulatory Agency (ANRT), the public body responsible for the control and regulation of the telecommunications sector.

During Benchaaboun’s management of BCP, the bank group consolidated its position as the country’s leading bank and acquired many banks on the continent and now has banks in 13 African countries. At the end of 2017, the net banking income “exceeded for the first time the symbolic threshold of MAD 16 billion, to reach MAD 16.36 billion,” according to the African Press Agency (APA).

Benchaaboun also served as an expert for the International Monetary Fund.

In April 2010, Benchaaboun received the Ouissam al Arch, a military decoration bestowed by the King.

First to open Moroccan bank representative office in US

The representative office “will facilitate the business relationship of the Moroccan community with BCP and put at the disposal of all of its customers the necessary information on financial products and services offered by the bank in Morocco,” said Benchaaboun during the inauguration celebration.

The office would also “give potential American investors a better window on opportunities available under the bank’s programs, and allow us to bring all of the Group’s expertise to bear on implementing those opportunities,” he added.

On the occasion, Benchaaboun stated that BCP would take necessary measures to establish agreements with major US financial institutions to make secure money transfers faster and at a reduced cost for Moroccans. 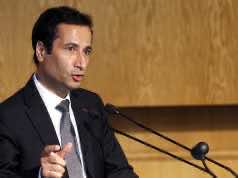 Profile of Mohamed Boussaid, Morocco’s Minister of Economy and Finance