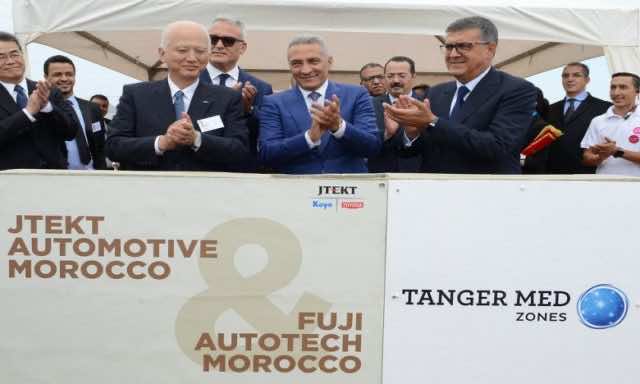 Agata said that the company’s new plant will allow the group to support the accelerated developments in the automotive sector over the next 15 years. He also noted that the automotive industry is moving towards the construction of electric cars and autonomous vehicles.

On June 28, JTEKT announced its Tangier’s plant, “JTEKT Automotive Morocco,” would be JTEKT’s first industrial platform in the MENA region.

JTEKT’s new plant will manufacture and sell automobile parts and employ approximately 60 people immediately and up to 200 people in the long term.

Minister El Alamy stated that the Japanese company invested around €20 million for the construction of its new plant and will employ 100 people in the advanced technology sector.

The plant of 11,300 square meters is located over an area of 6.5 hectares in the Tanger Automotive City free zone. It will supply automotive manufacturers with plants in Morocco, such as PSA and Renault.

JTEKT’s plant, which is expected to start production in 2020, aims produce 300,000 units in its first year.

With over 45,600 employees, the Japanese manufacturer has 136 subsidiaries in 27 countries around the world. In 2017, JTEKT had a turnover of €11 billion.