Rabat - Morocco signed Monday in Casablanca 26 industrial investment in the automotive sector with a total budget of MAD 13.78 billion. Chaired by King Mohammed VI, the signing of these new agreements show the strong positioning of the sector in the region, with a strong added value that demonstrates the growing confidence of major global operators in the industrial acceleration plan. 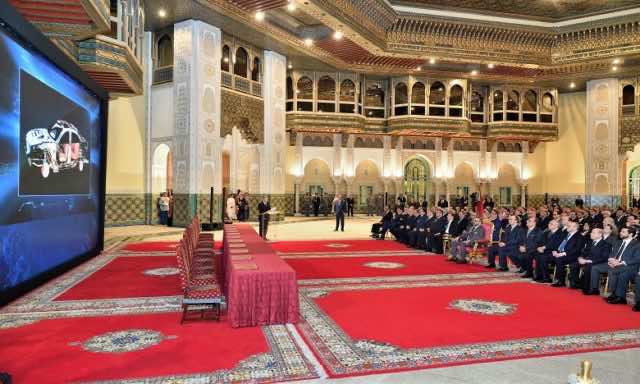 By
Chaima Lahsini
-
Chaima Lahsini is freelance journalist and activist with the Al-Fam collective in Rabat.
Dec 11, 2017
Spread the love

Rabat – Morocco signed Monday in Casablanca 26 industrial investment in the automotive sector with a total budget of MAD 13.78 billion. Chaired by King Mohammed VI, the signing of these new agreements show the strong positioning of the sector in the region, with a strong added value that demonstrates the growing confidence of major global operators in the industrial acceleration plan.

These agreements relate to the establishment of 26 factories of subcontractors, mainly for the French groups Renault and PSA Peugeot Citroën, for investments of MAD 13.78 billion and the creation of 11,568 direct jobs, announced the Moroccan Minister of Industry, Moulay Hafid Elalamy, in a speech.

These investments are underway or will be committed in the coming days, according to a statement issued by the Royal Palace.

The 26 investment agreements concerning French, Spanish, Japanese, and American equipment manufacturers were signed at the Royal Palace of Casablanca, in the presence of King Mohammed VI, several ministers, Moroccan businessmen, and foreign bosses of the sector of the automobile.

French automotive giant Renault signed six agreements with equipment manufacturers as part of a “Renault ecosystem.” The manufacturer is currently supplying machined parts worth EUR 1 billion a year from Morocco and achieves a local integration rate of 55 percent.

For its part, PSA Peugeot Group has signed 13 agreements for the development of its unit in the kingdom. The PSA Peugeot Ecosystem group will include a Chinese company manufacturing aluminum wheels, which will settle in Tangier Tech, as well as a Japanese specialist in power steering and a Spanish manufacturer of mirrors.

Peugeot has recently launched the construction works of its industrial pole of excellence in Kenitra, including a plant with an annual production capacity of 90,000 vehicles starting 2019, with a 60 percent integration rate.

The Minister of Industry also announced that the PSA Group has ordered sourcing for a MAD 600 million budget, while Renault spent nearly MAD 1 billion on the same order.

The French equipment manufacturer Valeo has also signed two agreements, while  five other investments will be made as part of the development of its “wiring and connectivity ecosystem” launched in October 2014.

Overall, these ecosystems will enable the creation of more than 80,537 jobs, reaching more than 90 percent of the target by 2020.  In 2016, these automotive giants generated an export turnover of MAD 60 billion, an increase of 50 percent compared to 2014.

Through these agreements, Morocco is fast approaching its ambition to install a production capacity of 1 million units of vehicles in Morocco by 2020, and thus integrate the world’s top seven automotive industry in the world in coming years.

Morocco’s ambitions for the automotive industry is to reach an annual turnover of MAD 100 billion by 2020, a local integration rate of vehicles leaving Morocco of more than 80 percent and the creation of 160,000 jobs.

Morocco has become the largest car producer in the MENA region, and the automotive industry has become in the last two years the largest exporting sector of the country, ahead of phosphates.

On Saturday, the Chinese giant BYD (“Build Your Dreams”) signed an agreement with the kingdom for the installation of an electric car factory near Tangier, becoming the third car manufacturer to set foot in this country of the Maghreb.