Rabat - Morocco’s head of government has tweeted about an “informal” meeting he had with the Kosovar foreign minister at the UN headquarters.

Rabat – Morocco’s head of government has tweeted about an “informal” meeting he had with the Kosovar foreign minister at the UN headquarters.

In New York for the 73rd UN General Assembly, Head of Government Saad Eddine El Othmani tweeted in Arabic about his meeting with a Kosovar official.

“During a tea break in the lobby of the headquarters, and without a predetermined date, an official from Kosovo who participated in the work of the General Assembly joined me,” El Othmani wrote in Arabic on September 25.

The General Assembly is meeting September 18 to October 5 at the UN headquarters in New York.

Along with Kosovo, South Ossetia, Abkhazia, Northern Cyprus, and Taiwan are not members of the UN. The five self-proclaimed countries are blocked from joining the UN because they are claimed by other countries.

El Othmani, who did not mention the official’s name or position, tweeted one hour after the Kosovar foreign minister, Behgjet Pacolli, had shared a picture of them on Twitter. 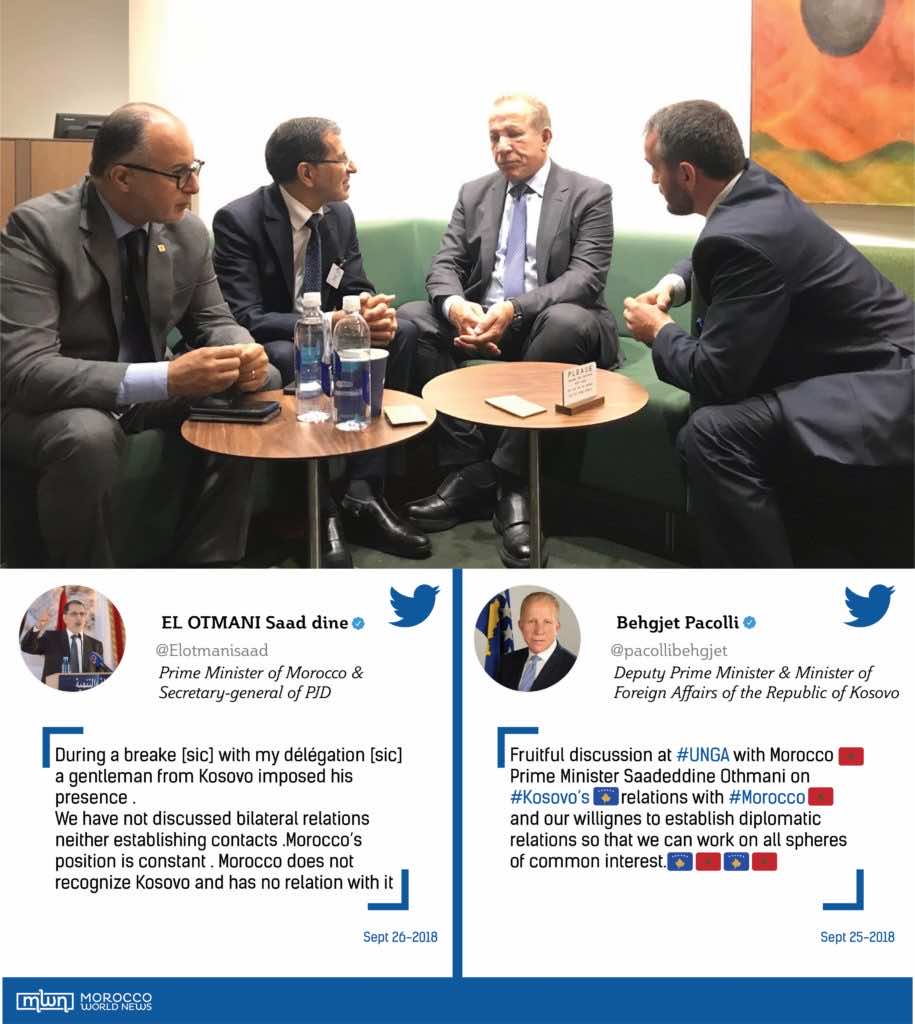 While El Othmani said he had not discussed bilateral relations with Pacolli, the latter said the opposite.

“Fruitful discussion at UNGA with Morocco Prime Minister Saadeddine Othmani on Kosovo’s relations with Morocco and our willignes [sic] to establish diplomatic relations so that we can work on all spheres of common interest,” Pacolli tweeted.

Samir Bennis, cofounder of Morocco World News and political analyst, questioned the rationale behind the tweet and the meeting itself.

El Othmani “should have refrained from sharing his useless tweet,” Bennis wrote.

In an apparent attempt to ward off any controversy following his meeting, the Moroccan head of government shared another tweet in English.

“During a breake [sic] with my délégation [sic] a gentleman from Kosovo imposed his presence . We have not discussed bilateral relations neither establishing contacts .Morocco’s position is constant. Morocco does not recognize Kosovo and has no relation with it,” he tweeted.

Pacolli posted a picture on his Twitter account showing him sitting along with El Othmani and two others.

El Othmani said Pacolli “imposed his presence” to meet him. However, the picture shows El Othmani smiling and paying attention to Pacolli.

“The publication of this information is likely to raise eyebrows in Serbia and Russia, especially as this meeting, though unexpected and informal, comes a short period of time after Moroccan officials met with their Serbian counterparts,” Bennis added.

Morocco does not recognize Kosovo, a region that broke away from Serbia and declared independence in 2008, because Morocco opposes secessionism and defends the territorial integrity of states.

Chinese news outlet Xinhua reported on September 12 that Moroccan foreign minister Nasser Bourita said his country “did not and will not recognize the unilaterally-declared independence of Serbian southern province of Kosovo, as the country opposes any unilateral act, and ‘understands Serbia’s worries because its own territorial integrity is endangered.’”

Bourita’s statement came when he visited Serbia, Romania, and Bulgaria to strengthen diplomatic ties and bilateral cooperation with Balkan countries.

“Mr. Othmani represents a nation and an entire people and is considered the second man in the state after the King. Therefore, he must be careful about every word he chooses to publish,” Bennis wrote.