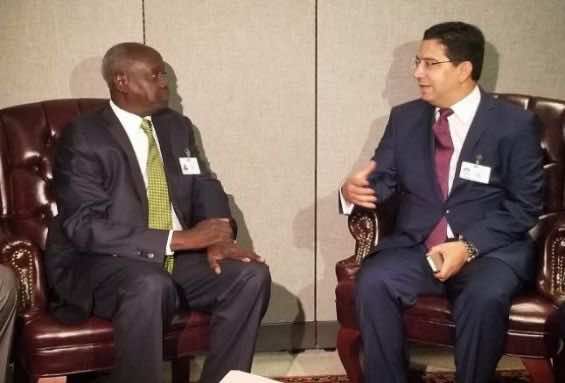 Nhial made his point in a press statement on Friday at UN headquarters, following a meeting with Morocco’s foreign minister, Nasser Bourita and the head of Morocco’s external Intelligence Agency, General Directorate for Studies and Documentation (DGED), Mohamed Yassine Mansouri.

The Sudanese minister said that South Sudan President Salva Kiir Mayardit had already addressed a letter to King Mohammed VI, informing him that “the Republic of South Sudan has never had and is not maintaining a relation with this separatist entity (SADR).”

“We fully respect the sovereignty and the territorial integrity of the Kingdom of Morocco,” Nihal was quoted by Morocco’s state owned agency, MAP, as saying.

Nhial emphasized his country’s support for Morocco’s autonomy plan, noting that South Sudan does not support “any entity” that opposes Morocco’ territorial integrity or wishes to be separated from the North African country.

Nhial conveyed South Sudan’s gratitude to King Mohammed VI who had set up a Royal Armed Forces’ field hospital in Juba as part of a humanitarian mission for the South Sudanese people in 2017.

Recalling the king’s visit to the field hospital in the same year, Nhial said that it was “a great achievement for the people of South Sudan,” reported MAP.