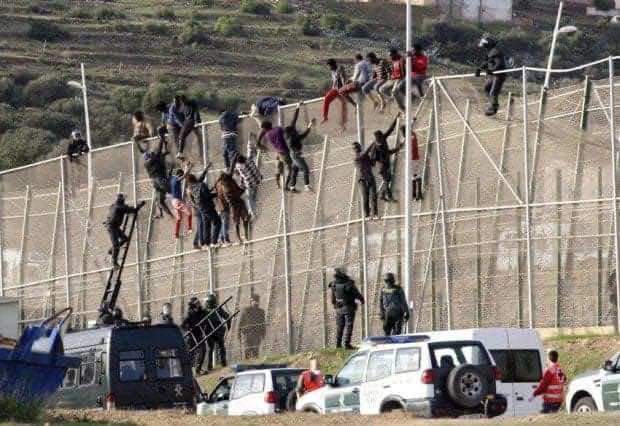 One of the 12 was seriously injured in the exercise. All the wounded were immediately transported to the Nador hospital for treatment, according to a military source who spoke to Maghreb Arab Press (MAP).

One migrant died after falling from the fence and 22 others were injured by the barbed wire. They were also transferred to Nador’s hospital.

The Moroccan Ministry of the Interior said that public forces arrested 141 undocumented immigrants during the operation.

Spanish authorities gave quite different figures, saying that only 200 migrants reached Spain, while 100 failed to cross.

Morocco has decided to repatriate all 141 sub-Saharan migrants who attempted to cross the borders on Sunday, according to the ministry’s statement.

On October 20, Melilla also announced it would repatriate 30 Moroccan migrants.

According to El Faro de Melilla, the repatriated migrants had been rescued from the sea by Spanish authorities on October 19 and transported to Melilla.

By July 30, more than 24,000 migrants entered Europe through the western Mediterranean route from Morocco in 2018.

Spain’s Ministry of Interior said earlier this year 38,000 migrants are believed to have entered Spain in 2018.

According to the Moroccan director of immigration and border surveillance, Khalid Zerouali, Morocco has aborted nearly 65,000 migration attempts annually since 2016.