Rabat- Hirak Rif detainee Bilal Ahabbad has become suicidal after Oukacha prison authorities did not allow him to attend his mother’s funeral. 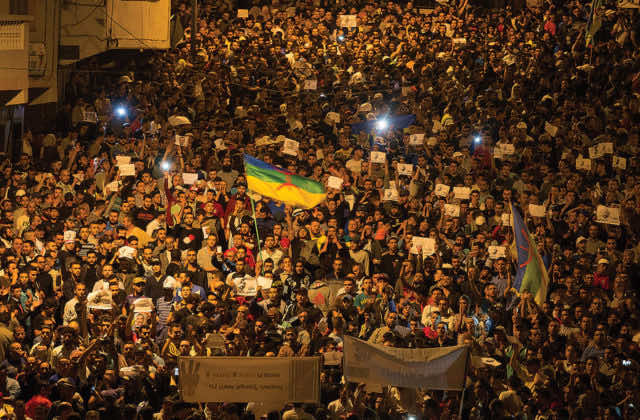 By
Ahlam Ben Saga
-
Ahlam Ben Saga is a Cultural Studies graduate from university Mohammed V of Literature and Humanities in Rabat.
Oct 30, 2018
Spread the love

Rabat- Hirak Rif detainee Bilal Ahabbad has become suicidal after Oukacha prison authorities did not allow him to attend his mother’s funeral.

Bilal Ahabbad swore to end his life if he was denied permission to attend his mother’s funeral. “I lost the most precious person in my life and if they do not take me out to attend her funeral, they will take me out in a shroud,” Ahabbad’s lawyer Mohamed Aghnaj quoted Ahbad in a Facebook post.

Aghnaj stated that Oukacha prison authorities in Casablanca, where Ahbbad is jailed, had promised Ahbbad that they would allow him to attend his mother’s funeral, but they failed to keep their promise.

Ahabbad’s mother, who suffered from brain cancer and traveled to Germany for treatment, died on October 23.

Her funeral took place on Friday, October 26, in Imeztoun in the Rif mountains, near Al Hoceima, according to news outlet Hespress.

Dozens of neighbors and locals attended the funeral in an atmosphere of solidarity and sadness. Videos of the funeral have circulated online ever since.

A psychiatrist visited Ahabbad in prison on Monday, saying that his psychological state has spiralled.

The psychiatrist also visited the Hirak leader, Nasser Zefzafi, and other Hirak activists who complained of the prison administration’s inability to fulfil its previous promises of “education, medical care and respect for the dignity of the activists and their families.”

Ahbbad, one of the youngest Hirak detainees, was sentenced by a Casablanca court to 10 years in prison for participating in “unauthorized” Hirak protests.

In June, a court in Casablanca sentenced 54 Hirak activists and journalists to 1-20 years in prison. Moroccan authorities had arrested the activists involved in the Hirak Rif protest movement in 2016 and 2017.

The Hirak movement began in October 2016 after the death of Mohcine Fikri, a local fishmonger crushed to death in a garbage truck while trying to save his goods that had been confiscated by authorities in Al Hoceima.

The incident angered citizens, causing protests across the country, but especially in Al Hoceima province, which condemned Fikri’s death and social disparities in Morocco. Police arrested an estimated 400 activists and protesters involved in “unauthorized” protests.

Following the ruling of the Casablanca court, hundreds of Moroccans rallied in protests in cities across the country, including Casablanca, Rabat, and the northern city of Nador, to denounce the “heavy” sentences.