While political conflicts act as a source of tension, couscous remains a unifying force between North African countries.

Rabat – The traditional dish of couscous continues to span borders and boundaries in North Africa, where conflicts divide. Couscous remains at the foundation of food culture in Algeria, Morocco, Mauritania, and Tunisia. Recently, the four North African countries overcame their differences and came together in a joint bid to give UNESCO heritage status to couscous.

UNESCO’s Intangible Cultural Heritage list highlights the world’s most treasured cultural practices. In 2016, Algeria announced a bid to get protected status for couscous, which sparked outrage from Moroccans who felt the dish was theirs as well. This time around, four ambassadors, from Algeria, Morocco, Mauritania, and Tunisia, joined to file the application, an act of comradery and coexistence in a time of division.

Morocco’s ambassador to UNESCO, Zohour Alaoui, asserted that the joint Maghreb bid underscores “the knowledge and the know-how of the practices related to the production and the consumption of couscous.” The move was an effort “to devote the tremendous wealth the Berber culture transmitted, not only to the Maghreb countries but also in Africa, the Mediterranean, and today in the world as a whole.”

Fatema Hal, a Moroccan-born anthropologist, says UNESCO recognition would be a positive step for the region. “If couscous can help bring them together, all the better,” she said. “But rather than putting all our energy into trying to get a label, we should be doing what’s necessary to preserve our cuisine.”

The history of couscous

Though the relationship between Morocco and Algeria remains strained, the historic ties of both countries to the traditional dish unified the two. Archeological evidence of cooking utensils in North Africa dates couscous back to the 10th century, and the first reference to the dish was in a 13th-century North African cookbook.

Since then, couscous has remained an integral part of society, in part due to the Maghrebi women who passed the tradition and way of cooking on from generation to generation. An elderly woman from Temara, near Rabat, told Morocco World News that in the past, couscous was eaten every day and mainly consisted of just grains and vegetables since meat was hard to get and expensive.

The dish originally came from the Amazigh (Berber) people of North Africa. The name couscous comes from the Amazigh words “seksu,” which means “well-formed” and the word “keskas,” which is the name of the cooking utensil used to make the dish. Historically, couscous was hand-rolled at home from semolina flour and water, however this time-consuming process is rarely practiced anymore. 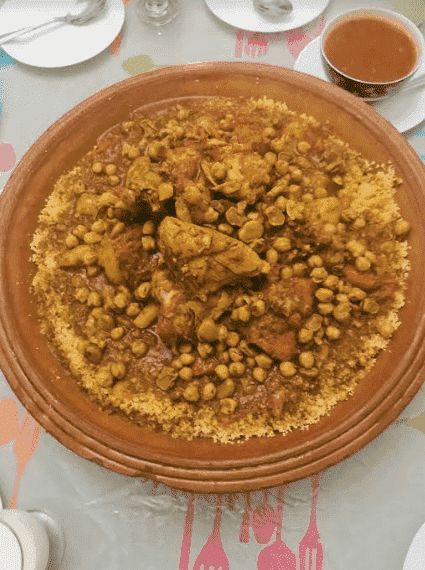 Moroccans typically pair couscous with leben, a beverage of fermented milk similar to buttermilk. While sour-tasting, the pairing is crucial to the overall taste of couscous. Historically, families prepared their own leben, however, now most Moroccans buy pre-made leben.

Variations on the traditional dish

After the 12th century, couscous spread from Morocco, Algeria, and Tunisia to Mauritania, Libya, Egypt, and sub-Saharan countries. With the spread of couscous came a variety of preparations of the dish.

In Tunisia, Algeria, Morocco, and Libya, couscous is traditionally served with vegetables, cooked in a mild broth, and topped with meat. In Algeria and Morocco, there is a sweet variation of couscous sprinkled with almonds, cinnamon, and sugar, called “sfouf.”

In Morocco, there is also “tfaya” which comes with sweetened onions, raisons, and almonds paired with either lamb or chicken. “Tfaya” couscous is often prepared for funerals, but can also be found on Fridays as well.

In addition to traditionally served couscous, Moroccans also eat “saykouk” which is a bowl of the couscous grains filled with leben. “Saykouk” is traditionally eaten in the summertime to combat the heat and is also sold from carts on the street year-round. The dish can also be prepared with barley in the place of couscous.

In Tunisia, couscous is made spicier using “harissa” and can also be topped with seafood or camel.

In Libya, there is another sweet variation to couscous referred to as “maghrood,” prepared with dates, sesame, and pure honey. Likewise, couscous is prepared as a dessert in Egypt with butter, sugar, cinnamon, raisins, and nuts and topped with cream.

Couscous, now a popular dish in Israel, came with the return of Jews from North Africa to Israel in the 20th century. Israelis eat a variation of the dish called “ptitim” which is made with larger pearl couscous.

Couscous as a unifying force

Since their independence, Morocco and Algeria remain in conflict. One area of tensions between the two countries is the longstanding dispute over Western Sahara. However, the common love for couscous has the ability to bridge deep divides.

The dish not only acts as a unifying force between rival countries but also as a centerpiece of family life. On Fridays, Moroccans traditionally gather around to share a platter of couscous following Friday prayers.

Halima, another woman from Temara, told Morocco World News, “It’s important to have couscous every Friday because it brings the family together.”

The dish is also eaten at births and weddings along with festivities at the end of Ramadan. Because of these occasions, the dish is associated with abundance, fertility, and fidelity.

Will the common bond over couscous prevail despite conflicts within or between nations in the Maghreb region?