The Moroccan model of religiosity has played a key role in eradicating extremism and protecting Morocco from terrorist attacks.

Rabat – The secretary-general of the Council of the Moroccan Community Abroad (CCME), Abdellah Boussouf, has said that the Moroccan model of religiosity is not well-known among Moroccans Residing Abroad (MREs) and in the West.

Boussouf was speaking at a conference at the Faculty of Arts and Humanities of Mohammed V University on Thursday evening, April 2, in Rabat under the theme, “Moroccan Model and Contemporary Challenges.”

Believing that the teaching of religious sciences must be in lines with other sciences, such as philosophy, economics, and social sciences, Boussouf called for Morocco to reconsider its science curricula to ensure a smooth integration of graduates into non-academic life.

The historian and researcher wondered how Morocco could introduce the diaspora to the Moroccan model without translated versions of Moroccan religious texts into the most common languages MREs speak, such as French, English, Spanish, and Italian.

While Morocco has had few terrorist attacks at home, a number of MREs became extremists in Europe. According to the Moroccan Central Bureau of Judiciary Investigation (BCIJ), there are 500 to 900 European terrorists of Moroccan descent.

Within Morocco, the government has established a program called “Moussalaha,” an Arabic word for reconciliation, as part of its deradicalization policy to deal with local jihadis and Moroccans returning from fighting with ISIS and other terrorist groups in Syria and Iraq.

The program deals with the returnees according to three categories: Religious extremists, terrorist prisoners, and ideological recruiters.

The radicalized prisoners do not interact with “ordinary” prisoners to prevent the dissemination of radical ideologies. There are 800 Islamic radicals in Moroccan prisons.

Highlighting Morocco’s stability and security amid regional disruptions and various terrorist attacks whether on Muslims or non-Muslim communities, Boussouf stated that it is a result of the Moroccan model guaranteeing pluralism and coexistence between religions, which is also Constitutionally protected.

The Moroccan Constitution guarantees everyone the freedom to practice his religious activities. The criminal code, however, bans anyone from inciting a Muslim to convert to another religion.

Boussouf pointed out that the Mohammed VI Institute for the Training of Imams in Rabat, which Pope Francis visited in March during his first visit to Morocco, has as its primary mission the education of imams on the true values of Islam and fighting extremism by promoting Morocco’s interpretation of Islam.

Morocco follows the Maliki school, which is one of the four major madhhabs of Islamic jurisprudence within Sunni Islam. The Malikis’ primary sources are the Qur’an and trustworthy hadiths, which tell the sayings, customs, and actions of the Prophet Muhammad.

While Maliki Sunni Islam is followed by the majority of Moroccans, there are some who follow Wahhabi Sunnism, the conservative interpretation of Islam which Saudis follow.

Wahhabism is considered the main source of extremist ideologies in Islam and global terrorism.

To counter Wahhabism, King Mohammed VI ordered a Moroccan version of Qur’an, called the “Mushaf Mohammadi,” written in a special font and recited in such a manner as is best suited to the Moroccan context and the Maliki school of Islam.

For Boussouf, the Moroccan model comprises moderation, respect, and acceptance of the other, and is capable to address modern challenges.

Among the modern challenges facing Islam, particularly in Morocco, is advocacy for gender equality in inheritance.

As inscribed in the Qur’an, male relatives receive double the inheritance of women in most cases. For example, if a father dies leaving behind two children, the son inherits twice the share of his sister.

In April 2018, approximately 6,661 people, including Moroccan public figures, doctors, actors, and professors signed a petition to end Morocco’s application of the inheritance law.

In Tunisia, after a long debate, the government approved in November 2018 a law for gender equality in inheritance.

Morocco’s vision to establish a moderate Islam, along with its security-oriented approach, have all contributed to maintaining long-lasting stability, according to Boussouf. 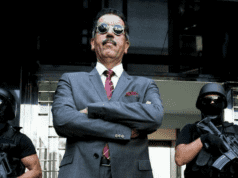