This year, Morocco started the fast on Tuesday, May 7, but a large number of countries including the US started May 6. I did not pay attention that first day since I was in Morocco and I was enjoying the fast with my family. 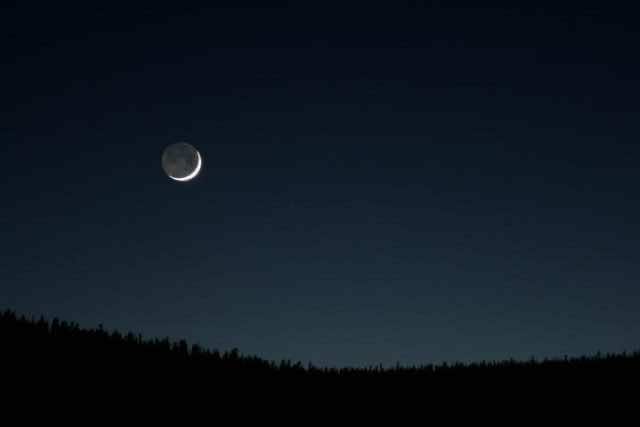 Rabat – On May 8 however, I happened to gaze at the sky after Iftar and the new moon was so clear and so high in the sky I thought for sure it was at least three days old, and I promised myself I would research it and write about it.

I later found out that the new moon was born on Saturday, May 4 at 10 pm Morocco time, two full days before the official beginning of Ramadan! I also found out that the moon set 20 minutes after sunset on May 5 in the southern regions of Morocco, which means there was a good chance of seeing the new moon by the naked eye around sunset on Sunday. Yet fasting did not begin till Tuesday.

So how does Morocco decide the first day of Ramadan? Or ‘Eid for that matter? Apparently, the Ministry of Habous and Islamic affairs is in charge of the announcement.

However, it is not clear from their site how this is really done. Online articles state that Morocco follows the Malikit school of thought, hence visibility by the naked eye is the acceptable method.

So the ministry deputies throughout the nation are encouraged to call in when they observe the new crescent. Some articles also mention astronomer Hicham Elaissaoui who is associated with Dar Al Hadith Al Hassania, predicted the May 7 date, but it is not clear how.

It looks like a formal process that takes into account hard science is not really in place, and if it is in place it is not clearly shared with the public. In the US, and Europe the Fiqh Council of North America (FCNA) and European Council of Fatwa and Research (ECFR) have decided to use astronomical calculation as a religiously acceptable method to predict the new moon.

The agreed upon conditions are stated here for reference:

Wait, I will explain. When a new moon is born it is exactly between the sun and the earth, forming almost a straight line. That is when the moon completes its revolution around the earth, a lunar month.

This is called conjunction and the moon stays very close to the sun as it moves in earth’s sky, which means during the day it is lost in the glare of the sun and we cannot see it by the naked eye, so only a brief moment around sunset can the moon be visible by the naked eye. It cannot be seen at night because it sets shortly before or after sunset.

The 8-degree elongation and 5 degrees above the horizon at sunset are accurate ways of saying that the new moon has to set after sunset by a short delay in order to see it with the naked eye from anywhere in the world. These numbers can be predicted early in advance with modern astronomy and mathematics.

It is also interesting to note that FCNA (US) is in agreement with ECFR (Europe). Before this agreement came about, FCNA used to base their calculations on similar conditions but referred to local time of Mecca. Now the conditions are defined on a global scale. In the early 80s and 90s, it was common to find neighboring Muslim communities in the US and Europe fasting and celebrating Eid Al fitr to different dates, which was unfortunate because it often created an atmosphere of division.

In those days, I used to look up the US naval observatory data for the new moon, which provided very accurate predictions for the moon phases not just for years but for decades. Why do the navies of the world care? One answer is the tides, some ships cannot be launched at low tides, because the harbor waters are not deep enough. Tides also affect bridge clearance for ships and so knowing the times of low and high water is of great benefit to marine navigation.

Finally, it is important to note that life as we know it is water based and it is not farfetched to imagine that the water in our gardens, our farms, and even our bodies follows the same tidal rhythms and hence has a direct impact on growth and reproduction of all life forms on the planet. Why isn’t the science of the lunar calendar given more importance by the ministry of religious affairs?

The ministry is reportedly the richest in Morocco, yet there seem to be no significant investments made by it in astronomy, science, and math.

The ministry should make a serious effort in building observatories dedicated to the lunar calendar and the great science, and mathematics that it generates.

Islamic history is rich with this and one can argue it was this heritage that provided the hard data for the modern Copernican view of the world. After all, doesn’t the Quran say that the light of the sun and the moon were made in such a way that we may know how to count the years and know mathematics?

I call on the ministry of religious affairs to do its job not only in spiritual training but also the sciences and mathematics that the Quran calls for. Imams should be trained in the sciences, especially astronomy, as it is this science that clears the mind of doubt and increases faith.

Imams should be at least familiar with some of the technologies and telescopes that help predict the lunar calendar so that they can, in turn, enlighten the masses instead of keeping them in the dark. The moon’s light was made so that we may know.

For those who may be curious about how to get times for moon phases, moonsets and moonrises instead of just the usual sunset and sunrise times, I used the following website made by a small Norwegian company: www.timeanddate.com

Note that the new moon for Eid Al Fitr 2019 will be born June 3 at 10 AM UTC (Coordinated Universal Time) this is also local time Morocco since it is on the same longitude as Greenwich.

The website I referenced gives the times for moonset on June 3 as roughly 20 mins after Sunset in the southern regions of Morocco. This offers a small window for possible observation of the new moon, although it will be very young. FCNA already announced Eid as June 4, 2019, for the US.

Mr. Belkhayat is currently a principal scientist with Huntington Ingalls serving as a power and energy subject matter expert. He has been working in the field for over 20 years.

He obtained his Energy Systems Ph D from Purdue University EE department in 1997. He published numerous papers on the stability of integrated DC and AC power systems. He also holds several patents in the field. His research spans a wide range of energy sources, including nuclear, hydrocarbon, wind, solar, and sea waves. He also researched various conversion processes including thermo-photovoltaics, high voltage power electronics, and rotating machinery. Dr. Belkhayat also taught for over five years, energy conversion, controls, and modeling and simulation at the Naval Post Graduate School in Monterrey California and at Qatar University.