In the UK public breastfeeding is a contentious issue, but, I wondered, what would it be like in Morocco?

Rabat  – “Don’t you have to wear a headscarf?” and “What do you wear in Morocco?” are questions I am sure most European expats regularly hear. Certainly, these questions seem to fascinate my friends.

Visitors worrying about swimwear and t-shirts in Essaouira all seemed very surprised to learn that Moroccans are not horrified by arms, and that my sisters-in-law wear – pause for dramatic effect – normal swimming suits at the beach! So when I decided to breastfeed my son, I braced myself for the interrogation.

Having already spent nearly two years batting off comments about modest clothing from less well travelled British friends, I was not looking forward to the breastfeeding debate. However, in the UK, breastfeeding is already a contentious topic for some and it wasn’t going to be easy.

Having put “breastfeeding in Morocco” into google, Lonely Planet and Tripadvisor posts jumped out from the list. “As a western woman having a baby attached suckling on the teat would attract unwanted attention in a public space. I wouldn’t recommend you considered that. Moroccans are very friendly towards young children but unlike Eastern Africa I have never seen a woman in a public space breastfeed in morocco,” commented a tripadvisor user.

The lonely planet debate was a bit more positive, although one user asked “Would you do it in public where you are from? I hope not. Use the restroom.” Another commenter wrote “Sorry, but I find that women who think we all want to see their breasts, full of milk and bulging veins, are wrong. It is not the prettiest sight.”

However, I comforted myself; these comments have more to do with attitudes to breastfeeding in general than with Morocco and could have easily been said about breastfeeding in the UK, US, or any other country.

Read Also: ‘Expats’ in Essaouira: a Help or a Hindrance

In general the comments seemed to suggest that it is not at all common to see Moroccan women breastfeeding in cafes, restaurants, or any public spaces. However, Mumsnet told me exactly what I wanted to hear; “All in all, probably less stressful than feeding in the UK.” Encouraged, I decided to hold on to this comment and put the others out of my mind. But that, of course, was easier said than done.

On my first outing with the great baby in Essaouira, I was nervous and tried to plan the excursion around his usual feeding times in order to avoid having to prove the mumsnet breastfeeder either right or wrong. As is usual with babies, this did not go to plan. On arrival in the medina, despite baby having eaten right up until the minute we got in the car to drive into town, as soon as we got out of the car the baby made it clear that more milk was all that would do.

Fortunately, we were very near to our usual coffee stop, Cafe L’horloge, which is run by an elderly gentleman who has known my husband since he was a child.

Like most cafes in Essaouira, it is mostly frequented by tourists and Moroccan men. We made for the cafe, where, upon arrival, we were greeted with enthusiasm by the proprietor. Having given Baby’s forehead the customary kiss, he rushed inside to fetch me a bottle of water, free of charge. I looked around nervously as we prepared to feed. The baby latched on quickly, and ate greedily, while I looked around anxiously, waiting for some kind of negative reaction. There was no negative reaction. I kept expecting one. None came.

While I was feeding the baby, the owner of the carpet shop next door almost ran over to touch Baby’s head, saying “mahshallah.” A Moroccan woman, with her elderly mother, smiled at me with approval, and the grumpy looking man reading the paper at the table next to us looked on indulgently. So, the mumsnet Mum was right; in Morocco, breastfeeding was a perfectly acceptable thing to do.

My little boy is now five and a half months old and both he and I have become very comfortable with feeding in cafes across Essaouira, and we even had to stop once on the Corniche for a quick snack! We have never experienced anything but positive comments, kind looks, and offers of help.

Read Also: Only 26% of Moroccan Mothers Breastfeed Immediately after Birth

So, where did the negative online comments on breastfeeding in Morocco come from?

Honestly, I think some of this definitely comes from well-meaning ignorance. People assume, and I myself made this assumption before coming to Morocco, that, because the population is 99% Muslim, its culture is the same as that of all predominantly Muslim countries. There is also a presumption that all Islamic countries are of one, homogenous culture. The other factor here is thinking that modest dress and breastfeeding are one and the same issue; which they are not.

The other significant point is that breastfeeding in general is not common in Morocco so the question of public breastfeeding becomes slightly defunct.

Last week my husband and I bumped into a friend of his at a cafe. This friend has a baby the same age as ours; although our little monster is significantly larger. “What do you feed him?” the friend asked, slightly aggressively, I felt. My husband replied that he is breastfed. “But what do you give him with the milk?” “Nothing,” my husband replied, “he is exclusively breastfed.” At this point our usually calm and collected friend looked incredulous and inexplicable angry. He said to my husband firmly, “You should thank God your wife has enough milk.”

After this exchange, my husband and I considered for a while and realised that we don’t know any Moroccan women, including in his family, who breastfeed (or breastfed) exclusively. It was also not the first time a Moroccan acquaintance or family member had asked me what I do to supplement milk or what I do to help with lactation. Perhaps, then, the reason tripadvisor users had not seen Moroccan women breastfeeding in public is that they just don’t breastfeed.

Some of them choose to use formula instead, perhaps believing that it has vitamins and minerals that breast milk doesn’t, others have to work and cannot stay with the baby all the time, while many more simply don’t produce enough milk.

So, next time I travel to England and someone asks me about breastfeeding in Morocco, I will be able to confidently reply that Moroccans, or at least the ones I know, have absolutely no problem with breastfeeding, public or otherwise and that the mumsnet breastfeeder’s review was entirely accurate. I can heartily recommend Beach Friends, Megaloft, Cafe L’Horloge, and Restaurant Les Planches in Essaouira, to name just a few.

My answer would be less confident, however, about the UK, where, despite the high number of breastfeeders, one still gets the odd disgusted look or disapproving whisper. I have been given a very cold welcome while breastfeeding in Yeovil’s Tesco cafe ( they needed to close) and breastfeeding in Gatwick airport well nigh impossible.

However, there are some very comfortable places and I am very grateful to the Grosvenor in Shaftesbury, Dikes of Stalbridge, and The Mitre, Shaftesbury where the staff and customers have never made me feel anything but utterly welcome and comfortable. 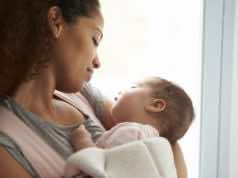 Only 26% of Moroccan Mothers Breastfeed Immediately after Birth

Breast Feeding in a “Critical” Condition in Morocco