A report from Morocco’s court of auditors finds that the level of pesticides stem from ONSSA not taking responsibility for the monitoring of food safety.

Rabat – The annual report from the Court of Auditors for the year 2018, published on September 11, has raised serious concerns about food hygiene and safety in Morocco.

The report found shocking issues in several sectors, especially the agricultural sector. The sector is under heavy scrutiny as it constitutes one of the pillars in Morocco’s economy.

Driss Jettou, the head of the court pointed fingers at the Moroccan National Health Security Office of Food (ONSSA) in the report. The office operates under the supervision of Aziz Akkhannouch,  Minister of Agriculture and Fisheries.

The court accused the office of not generalizing the monitoring of food safety in local markets.

The court found that certain steps  of the food chain “are not covered by [ONSSA’s monitoring system], including wholesale fruit and vegetable markets and traditional poultry slaughterhouses.”

Jettou’s findings warned that all concerned parties should be involved in the monitoring of the health and safety of food products.

The  Ministry of Interior, local authorities, and royal gendarmerie members who monitor transport used to distribute food are, according to the court, all bodies with a responsibility for monitoring food hygiene.

“The porosity of some border points makes it difficult to control [food safety] due to the smuggling of live animals, and veterinary medicines, as well as agricultural pesticides.”

Health concerns from pesticide use

According to Breast Cancer.org, there is a real concern that chemicals such as pesticides can increase the risk of breast cancer.

“There’s a real concern that these chemicals may cause health problems, including an increase in breast cancer risk.”

While no studies show direct connections between pesticide exposure and risk of breast cancer, “young female farmworkers are at higher risk for a range of medical conditions. And some of the most commonly used pesticides have been shown to mimic estrogen in laboratory animals,” the organization said.

Read Also: Almost Half of Deaths by Poison in Morocco Caused by Pesticides

The cancer mortality rate has increased in Morocco in the past few years, especially in cases of cervical cancer. In 2018, in the region of 2,465 women died of cervical cancer, out of the 13.2 million women in Morocco. The number of deaths from cervical cancer per year nearly doubled in the country between 2012 and 2018, increasing from 1,076 to 2,465, according to the coalition.

The use of agricultural pesticides, the report noted, is “one of the main measures to improve productivity, but such use must be subject to a number of conditions to reduce the adverse effects that such pesticides may cause.”

The conditions include respect for the amount of the approved product in fruits and vegetables, the report added.

Not respecting such conditions can cause high levels of pesticide residues in fruits and vegetables. Pesticides can cause serious human health problems and damage the environment. 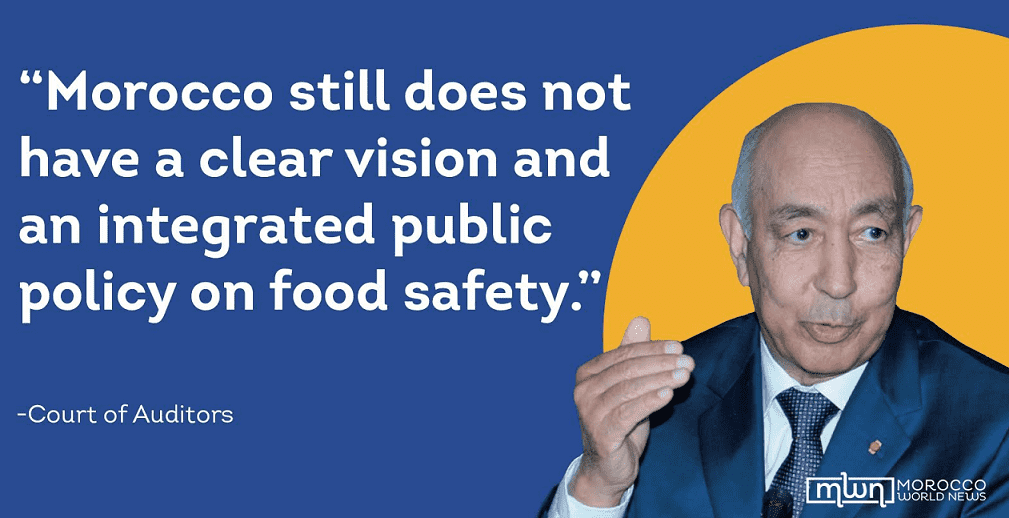 Products for exports are subject to “strict control of agriculture pesticide residues,” while products distributed in the domestic market are not subject to the same standards, the report noted.

Staff at the regional divisions have only completed one monitoring plan for pesticide residues in fruits, vegetables, and aromatic plants to control plant products or plant origin.

The report warned that this issue facilitates the smuggling of foods of unknown origin and health status into Morocco.

There is also a lack of coordination between stakeholders involved in food control at ONSSA.

The issue makes the establishment of good tracking targets impossible.

“The size of human resources is not commensurate with the size of the tasks entrusted to the office [ONSSA].”

The report emphasized that a large number of ONSSA staff retired in recent years.

The report found that concerned administrations are often unable to hold to account violators who produce, store and distribute food products.

“The [ONSSA] observers do not comply with the requirements of LAW 07.28, as these observers have only limited authority to impose administrative sanctions against” vendors and manufacturers who violate the standards.

The law only allows observers to seize products not meeting safety requirements.

Article 18 of Decree 617.98.2  of January 5, 1999, on the inspection of livestock’ safety and quality, stipulates that meat products shall be damaged if they don’t meet consumption standards.

The court finds that slaughterhouses don’t have the necessary means to respond to the requirements of destroying meat products that are found not safe for consumption.

Most municipal abattoirs do not have a crematorium or, in cases where they do have, it is not used to the high cost of fuel consumption.

The slaughterhouse in the city of Temara, near Rabat, is an example of this.

In rural areas, the situation is “worse,” finds the report.

“In  slaughterhouses in rural areas, slaughter  and skinning conditions are not conducted in the proper way.”