Thomas Reilly reiterated his country’s determination to take cooperation between Rabat and London to a higher level.

Rabat – British ambassador to Morocco Thomas Reilly said Morocco has made notable progress in maintaining its political and economic stability over the years.

In a statement to CNBC-Africa, the diplomat remarked on Morocco’s role in Africa and its investment expansion on the continent.

Speaking at the UK-Morocco Business Dialogue, held in London this week, he said that Morocco is the second-largest investor in the continent.

“Morocco has a young population and is well-linked in terms of infrastructure,” the diplomat added.

The diplomat renewed his country’s determination to take cooperation to another level in several areas, including sustainable development and prosperity.

He concluded that the two countries have a lot to offer to the African continent.

Several UK officials shared positive remarks about the UK-Morocco ties, with Minister of State for International Trade Conor Burns among the most vocal.

The minister affirmed there is a lot of “potential for UK and Morocco to work as partners to develop investment across Africa.”

“Let us embrace the opportunities before us and build our relationships, strengthen our ties, and increase the future prosperity of people in Morocco and the UK,” he said.

Burns also encouraged companies in both countries to think about expanding investments in the partner state. 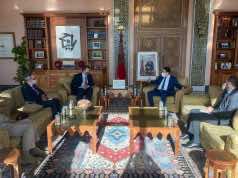