A video in Fez has gone viral online, with a woman claiming the city detected the first case of coronavirus at a Chinese restaurant.

Rabat – After rumors circulated on social media networks that a Chinese woman at a hospital in Fez showed coronavirus symptoms, Moroccan health officials called the story a false report in a statement.

The delegate health department in Fez denied the story and confirmed that the hospital in question had not received any patients exhibiting symptoms of the deadly disease.

The source added that the department is monitoring the situation closely and will relay any new information to the press and citizens.

The video appears to show a Chinese restaurant in Fez called Great Wall.

“All people are covering their noses to avoid infection,” she said. The video also shows an ambulance near the restaurant.

“They found a coronavirus case here. Chinese people who entered the country brought the disease. A man fainted inside the restaurant,” the woman said to another person in the neighborhood.

“These are all lies,” staff at the restaurant told Morocco World News.

“The restaurant’s manager had a fever so I called the ambulance. When the doctor saw him, he told us he simply suffer from the cold.”

The staff said the manager would file a lawsuit against the woman for spreading rumors.

Morocco’s Ministry of Health has denied several rumors about the detection of coronavirus in the country.

The authorities in Mohammed V International Airport and ports across the country are putting in place strict preventive measures to detect possible cases, especially after the scheduled flight from Beijing on Tuesday.

The coronavirus is a potentially fatal and highly contagious disease that causes respiratory infection. The disease has killed at least 132 people since its outbreak in Wuhan, China, in December 2019 with almost 6,000 confirmed cases in China alone. 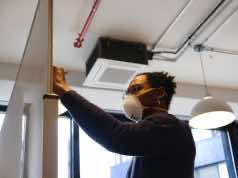