Travel restrictions due to the COVID-19 outbreak endanger crops in France and Spain as Moroccan seasonal workers cannot enter the countries but Moroccan agricultural exports are spiking due to a production decline in Europe. 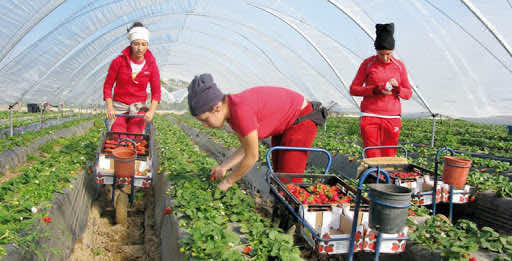 By
Zuza Nazaruk
-
Zuza Nazaruk is a Rotterdam-based journalist who focuses on social inclusion and climate emergency.
Mar 27, 2020
Spread the love

Casablanca – French and Spanish farmers are expressing worry over the fate of their crops in light of the travel restrictions imposed due to the COVID-19 outbreak. Every year, thousands of seasonal workers from Morocco travel to France and Spain for harvesting.

France is estimated to need 800,000 seasonal workers for its harvesting season. In the next three months, France needs 200,000 workers to harvest asparagus and various berry crops.

Usually, two-thirds of France’s seasonal workers come from abroad, mostly Eastern Europe, Tunisia, and Morocco. There are approximately 30,000 Moroccans in France during the harvest season.

In 2019, 19,000 Moroccan workers traveled to Spain to help with berry crops in the Huelva province. Approximately 36 percent of all seasonal workers in Spain are Moroccan.

This year, European farmers are left with no help and the seasonal workers with no pay. The farmers are desperately trying to save their crops by employing local workers and increasing efficiency. They are worried about their increased vulnerability to weather conditions that can quickly turn the harvesting season into a “catastrophe” if unfavorable.

The French government is trying to prevent the crops from rotting by inviting those whose professions were inhibited by the COVID-19 outbreak, such as waiters or hairdressers, to work in harvesting.

The shortage of field workers is one of the main sources of concern over the global food supply, according to Chief Economist of the UN Food and Agriculture Organization Maximo Torero.

Despite the dire predictions, the Moroccan Center for Economic Conditions (CMC) estimates only a 3% decline in the agricultural sector. Such a difference is not dramatic: Declines in the agriculture re-occur regularly due to annual droughts impacting the crops.

European markets may be hit hard by soaring prices due to the shortage of seasonal workers, but the standstill in Europe allows Moroccan agribusinesses to flourish. The demand for Moroccan agricultural products, most notably tomatoes, courgettes, and mandarins, has spiked in the last week. The orders are coming mostly from the Netherlands, France, Germany, and the US.

Agriculture accounts for 20% of Morocco’s GDP and employs 40% of the population. In rural areas, 80% of people work in the agricultural sector.

The Moroccan government offered unprecedented help for its domestic economy on March 27 with the “Damane Oxygene” program, offering MAD 20 million (around $2 million) to enterprises affected by the COVID-19 outbreak.