The journalist apologized after releasing two videos in which he attacked Morocco and its people, claiming that the country’s economy is based on prostitution.

Rabat – Saudi journalist Fahid Al Shamri recently released a video in which he apologized to Morocco and its people for his recent indecent remarks against the country’s economy and Moroccan women.

In the new video on his YouTube channel, the journalist said that he was not targeting Morocco when he criticized “hats countries.”

He said he was referencing countries that were colonized by Turkey, where people used to wear traditional hats.

“I used the term to talk about all the countries that were colonized by the Turco-Mongol [tribes],” Al Shamri said, noting that Morocco was not among these countries.

“Honourable Moroccans should be proud of this fact. Saudi Arabia was not also colonized by Turco Mongol too.”

He also criticized Egyptian journalist Motaz Matar, who had slammed him for his first video against Morocco, Egypt, and Jordan.

Al Shamri said that Matar responded to one of his videos, claiming that “Turco-Mongol” did not colonize Saudi Arabia because it presented no value.

“Morocco is full of goods, but Mongol Turks could not colonize it so what is his response regarding this?” Al Shamri mused.

After his heated response to Matar, the journalist apologized to all Moroccans for his “spontaneous remarks.”

“I don’t feel any sort of hatred against Morocco nor the Moroccan government. I have all respect for honorable Moroccans,” he said.

He added that he has forgiven all Moroccans and the country’s media that launched campaigns against him.

The journalist had stirred controversy by saying Morocco’s economy is “based on prostitution.”

In two videos, Al Shamri claimed that the bulk of the remittances that Morocco receives from its diaspora “comes from sex work,” alleging that the country “sends its women overseas to engage in prostitution.”

The comments did not go unnoticed and Morocco’s media and population heavily criticized the journalist for his false accusations against Moroccan women.

Al Shamri responded by diverting his accusatory narrative towards Qatari media outlets and their “mercenary” journalists.

The pro-Mohammed bin Salman journalist accused some reporters of unethically “receiving money from Qatar,” which has been in official tension with Saudi Arabia since 2017 due to the Saudi-led blockade.

These journalists “are people without nations; their motherlands are the nations that pay them,” Al Shamri said.

“This is why we don’t find any Moroccan journalists that receive Qatari money,” he said in contrast, circling back to his proclaimed respect for the North African state.

He further attempted to bolster Morocco, noting that some North African states have existed for thousands of years longer than many other countries, and asked Moroccans to end campaigns against him, “because repeating my words hurt them more than it does against me.”

Al Shamri said that some “enemies can use the campaign against Moroccans to create internal tensions.”

“If you have internal problems, fix that among you because I will no longer interfere in Morocco’s economy, tourism, politics, and social issues again,” he said.

Al Shamri said the video in which he apologized will be his final video released during Ramadan. 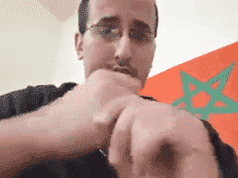