The market shift may bring about more economic crises for Algeria as the country heavily depends on oil production revenue.

Rabat – Spain’s gas imports from Algeria slowed down notably due to the continued decline in oil and gas prices, and the US has taken the lead in fueling the European country.

The change in the oil market urged Spain to look for cheaper markets to meet its demands, impacting Algeria’s 30-year-old position as the key leading supplier of natural gas to Spain.

Spanish news outlet El Confidential reported that Spain has turned to the US and Russia to acquire its liquefied natural gas (LNG) in March. The two oil markets have been supplying Spain through cargo ships.

The US and Russia brought more LNG to Spain through cargo ships than did Algeria through the Medgaz gas infrastructure or the Maghreb pipeline, the Spanish news report said.

Quoting industry experts, El Confidencial added that the new shift is due to low market prices.

The industry sources explained that several operators prefer to break their commitments and look for lower prices in other markets despite having to pay penalties listed in previously signed contracts.

The Spanish news outlet also cited data from the statistics website Cores, which shows that the US has overtaken Algeria as Spain’s gas supplier for the second consecutive month, representing a “historic surprise.”

The news outlet suggests that the change might have geopolitical implications on relations between Spain and Algeria if it is consolidated over time.

A member of the Organization of the Petroleum Exporting Countries (OPEC), Algeria is heavily dependent on oil revenue, with crude oil making up 20% of its GDP and 85% of all exports.

The country, however, is facing fierce competition in the market from major gas producers such as the US, Qatar, and Russia.

Algeria is facing a major economic crisis amid the political strife that followed the heavy protests last year seeking to reform a corrupted system, and due to its crippling dependence on oil.

Despite the decrease in oil prices, Tebboune maintained that any turnover would be beneficial for the country’s economy.

Tebboune also announced a cut in the national budget of 50% as international oil prices plummet. 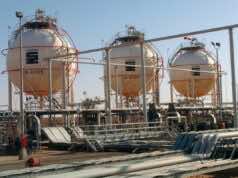