The police seized two boat engines and 540 liters of fuel.

Rabat – Moroccan police in the city of Dakhla, southern Morocco arrested 25 Sub-Saharan migrants on May 25 as they took part in an irregular migration operation.

The police arrested the migrants on a beach near the city, where they were attempting to leave Moroccan soil for Europe by boat.

During the operation, police seized two boat engines and 540 liters of fuel, a statement from the General Directorate of National Security (DGSN) has said.

Police placed the migrants in custody for investigation to determine the circumstances of the case and to arrest possible accomplices involved in criminal human trafficking network.

The operation is part of Morocco’s efforts to fight undocumented and human trafficking networks, the statement said.

The operation followed a similar raid on an irregular migration attempt on May 17.

The list of the suspects includes a Spanish citizen of Moroccan origin and five Algerians.

The suspects will also face charges for violating the country’s state of emergency measures, a statement from DGSN said.

The country’s efforts to battle human trafficking received applause from international bodies, including the European Union.

During a debate of the EP’s Committee on Civil Liberties, Justice and Home Affairs, Deputy Chairman of the parliamentary committee Emil Radev said that the EU should “recognize the major efforts made by Morocco in managing migration flows.” 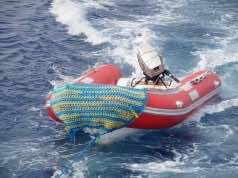