The Moroccan player spent half of his professional career with Belgian clubs and answered the Atlas Lions’ call for over 13 years.

In a list published on May 29, Boussoufa outranked some of the most renowned players in African football, including Cote d’Ivoire’s Yaya Toure and Egypt’s Ahmed Hassan.

“Mbark Boussoufa grew up in Amsterdam and played in Ajax’s youth academy for five years, but he never made it to the Dutch league … However, the now 36-year-old midfielder really broke through in [Belgium],” the magazine wrote.

Boussoufa won the Belgian Golden Shoe—an award given to the best football player in the Belgian league every year—twice, in 2006 and in 2010, Sport/Voetbalmagazine recalled.

The Moroccan player spent half of his professional career playing in the Jupiler Pro League. He made his pro debut with KAA Gent in 2004, before transferring to RSC Anderlecht in 2007 and playing for them until 2011.

After a five-year experience in the Russian league, with FC Anzhi Makhachkala and FC Lokomotiv Moscow, Boussoufa went back to the Belgian league in 2016 for one last season with his first club, KAA Gent.

Between 2017 and 2020, Boussoufa played in the Gulf for teams such as the UAE’s Al-Jazira FC, Saudi Arabia’s Al-Shabab FC, and Qatar’s Al-Sailiya SC.

During his club career, the Moroccan player appeared in 515 games and scored 110 goals.

Boussoufa boasts impressive statistics with the Atlas Lions as well, playing 70 games with the national squad and scoring eight goals.

Eligible to play for both Morocco and the Netherlands, Boussoufa chose to represent Morocco and made his international debut on May 23, 2006 in a friendly game against the USA.

In 2018, the then-coach of the Atlas Lions, Herve Renard, faced heavy criticism for naming Boussoufa to Morocco’s 23-man squad for the FIFA World Cup in Russia, while the player was unemployed due to the end of his contract with Al-Jazira FC.

Despite his lack of competitiveness, Boussoufa proved to be an important asset for the Atlas Lions, making memorable performances and earning the national team’s captain’s armband after the retirement of previous captain Medhi Benatia.

Boussoufa’s last appearance with the Atlas Lions was during the 2019 Africa Cup of Nations. After winning three games and scoring one goal in the group stage, Boussoufa, along with his teammates, lost against Benin in the competition’s round of 16.

The dramatic loss—4-1 in penalties, following a 1-1 draw and a last-minute penalty kick missed by Hakim Ziyech—led Boussoufa to announce his international retirement after representing Morocco for more than 13 years. 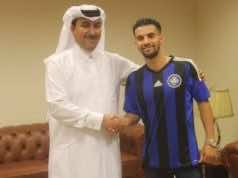 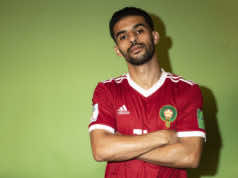