Transport professionals solicited the relevant authorities to alleviate the set of difficult-to-meet requirements in order to resume work.

Rabat – The professional bodies representing the passenger transport sector have announced their refusal to resume work today under the new specifications of the Ministry of Equipment, Transport, Logistics, and Water.

The seven professional bodies jointly expressed in a statement on June 24 their frustration with the new specifications of work, which they considered to present “crippling conditions.”

Earlier this week, the Ministry of Transport announced the resumption of inter-city travel beginning June 24, and travel transport within Zone 1 regions. In order to travel to Zone 2 regions, travelers must hold a work certificate justifying their movement or exceptional authorization issued by relevant authorities.

The Ministry of Transport set out COVID-19 preventive measures companies must meet in order to resume transport activities and get their personnel back to work. Transport professionals have been called upon to limit their passenger capacity to 50% without significant increases in prices.

The ministry also specified that passenger and tourist transport operators must hold lists containing passengers’ personal information — including ID number, name, and phone number —  to be archived for a period of no less than a month.

Under this requirement, ticket offices at bus stations must draw up three copies of the lists. The first copy will be handed over to the manager of the bus station, the second to the coach driver, while the third one will be kept by the cashier.

Transport companies said that the conditions are not favorable to make up for their three-month work suspension that resulted in severe revenue losses. They also argued that working under such conditions prevents them not only from fulfilling their financial obligations but also from maintaining workers’ employment in the sector and vital transport-related services.

The transport professionals have, however, reached out to the relevant authorities soliciting mitigation of the newly-set measures while stressing the impossibility to resume work under such conditions.

The outbreak of COVID-19 in Morocco has paralyzed most traffic throughout the country, leaving many transport professionals without that source of income.

The informal reigns over Morocco’s various sectors, including transport. The sector accounts for 32% of the country’s total informal workers, according to a study conducted by the General Confederation of Moroccan Enterprises (CGEM) in 2014.

This means that many transport workers are not registered with the National Social Security Fund (CNSS), and thus not benefiting from the health coverage, retirement benefits, nor the other services guaranteed by the CNSS. 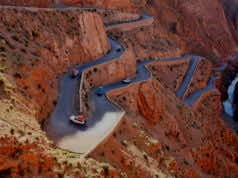