The establishment of a Greek-Moroccan Chamber of Commerce and Business Development in Athens enhances the “excellent” relationship between the two countries.

Rabat – Morocco and Greece are boosting trade and increasing bilateral economic relations with the establishment of a Greek-Moroccan Chamber of Commerce and Business Development in Athens.

Supported by companies from the two countries, the Chamber will offer a number of services to businesses, including investment and trade information and a wide-range of relevant contacts. It will serve as a source of reference and resources for Moroccan companies in Greece and Greek companies in Morocco.

Rubina Markopoulou, the Greek-Moroccan Chamber of Entrepreneurial Cooperation founder and chair, will spearhead collaboration efforts, networking opportunities, and relevant meetings to benefit the businesses and stakeholders involved in the two countries’ strategic partnership.

The Moroccan Embassy in Greece announced the creation of the Chamber and the projects’ approval from the Greek General Register of Commerce after more than a year of working toward its formation. The embassy noted that the initiative was carried out despite challenges presented by the COVID-19 pandemic.

Traditionally, relations between Morocco and Greece have been positive. Both countries are members of the Francophonie organization and the Union of the Mediteranian.

In mid-January of this year, Greek Minister of Foreign Affairs Nikos Dendias visited Morocco to discuss the countries’ common interests and bilateral cooperations. Dendias described the relationship between Morocco and Greece as “excellent” and expressed its support over strengthening Morocco’s ties with the European Union.

“Greece recognizes the constructive role of Morocco in the Arab world and in North Africa,” says the ministry. 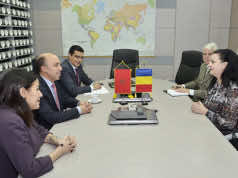