The ministry recorded the top mark, 19.47/20 in the Physical Sciences branch, in the region of Rabat-Sale-Kenitra.

Moroccan student Zineb Waski earned the highest of all of this year’s Baccalaureate scores in Morocco. Zineb is from the city of Temara, a suburb of the capital of Rabat, and studies at a private school.

The 18-year-old told Moroccan media how she handled the challenge of preparing for the exam during the remote study program.

Zineb said the atmosphere of studying at home was not easy, due to the lack of interaction between students and teachers. However, the young student said that she managed to keep herself motivated in order not to neglect any subject.

She attributed her motivation to her parents’ constant encouragement.

The student revealed that she was not expecting to earn the highest score in the Baccalaureate. Her feelings upon receiving the news were a mixture of happiness and surprise.

Zineb also shared her plans for the future, revealing that she has a fondness for medical studies. However, the Moroccan student said she has not yet decided which field to take on in her higher education.

The second highest of the Baccalaureate scores in Morocco went to a public school student. Bassam Eljihaoui, from the city of Beni Mellal, central Morocco, scored 19.35/20 in the branch of Physical Sciences.

The young Moroccan highlighted the negative psychological effect of the lockdown and remote study. He shared how the intervention of King Mohammed VI and the education minister led to the Baccalaureate exams’ success.

Bassam also attributed his success to all his teachers and the staff of his school. He also thanked his parents, who helped him stay focused.

The young student also shared his future plans for becoming a doctor, about which he is confident.

Bassam said that becoming a doctor is more than a dream for him. It is a gift to offer his grandfather, who always wanted to see him as a physician.

Following the announcement of the results, the education minister appeared in a video to congratulate students who passed the exam.

Amzazi also wished good luck to those who did not succeed in the normal July session, for the make-up session. It will take place from July 22 to 24. 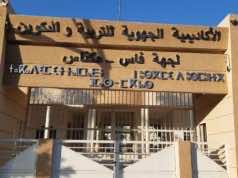 Baccalaureate results to be released on Wednesday