The prayers took place at the King’s royal palace in M’diq, northern Morocco.

Maghreb Arab Press (MAP) reported that the King performed the prayer without a sermon as part of the measures adopted to prevent the spread of COVID-19.

The prayer ceremony took into account all of the preventive measures to contain the spread of COVID-19, including social distancing.

After the prayer, King Mohammed VI performed the ritual of sacrifice, following the tradition of Prophet Muhammed.

The Imam then proceeded to the sacrifice of the second sheep on behalf of the Moroccan people.

Eid Al Adha is celebrated in the first ten days of the month of Dhu al Hijjah.

Like Eid Al Fitr, Moroccans had to perform Eid Al Adha prayer at home as part of the preventive measures to stop the spread of COVID-19.

Prior to prayers, King Mohammed VI sent messages of congratulations to the Heads of State of Islamic countries on Eid Al Adha.

The King conveyed his best wishes of health and happiness, “praying the Almighty to renew such an event by bringing further prosperity and well-being to the Islamic Ummah.” 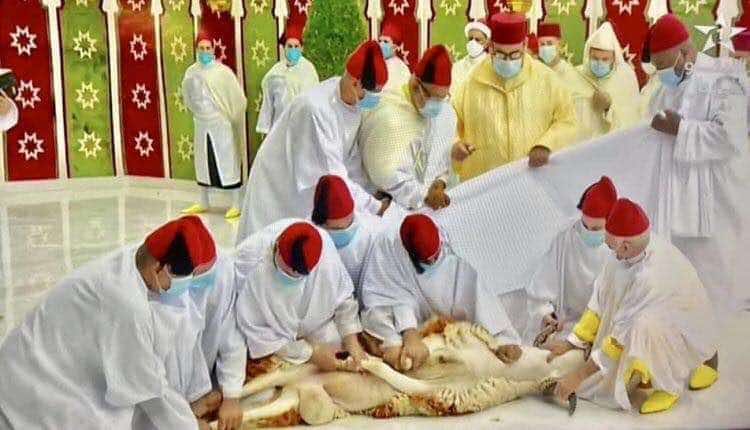 The King also received congratulatory messages for Eid Al Adha from a number of international allies and partners, including from US Ambassador David Fischer.

“As Muslims worldwide celebrate Eid Al Adha, it is an honor to extend wishes of health and happiness to your Majesty and to the Royal family, on behalf of the entire United States Mission to Morocco,” Fischer said.

He recalled that the celebration combines sacrifice, charity, and solidarity.

“It is a privilege for me to celebrate these values here in Morocco, on this occasion I wish the Kingdom a bright future, where prosperity and peace prevail.”

The King also received congratulatory messages from the Bahraini Prime Minister and from the Crown prince of the Gulf country.

Eid celebration this year comes in conjunction with the 2020 Throne Day celebrations. July 30 marked the 21st anniversary of the King’s accession to the throne.