Out of over 8.2 million livestock, the office identified 1,000 sheep that are not fit for Eid Al Adha.

Rabat – Morocco’s National Food Safety Authority (ONSSA) announced on Thursday that it has established a set of measures to ensure Eid Al Adha takes place under the best possible conditions.

ONSSA issued a statement announcing that it identified more than 8.2 million sheep and goats for Eid Al Adha.

Out of the total number, ONSSA removed more than 1,000 that do not fit the requirements for Eid Al Adha.

The safety authority also sent 25 complaints to prosecution about violations of preventive measures.

The office announced that it mobilized 400 veterinarians and technicians to ensure a successful Eid Al Adha through monitoring.

The authority launched the operation to identify sheep and goats intended for Eid Al Adha on April 22 with the support of the Ministry of Agriculture.

The operation ended on July 15.

According to the safety authority, ONSSA destroyed 108 tons of poultry manure used to feed livestock.

The operation to destroy the cargo was accompanied by other measures, such as forbidding farmers with offenses from marketing the animals whose identification tags have been removed.

The number of the sheep with tags removed reached 1,000.

The authority said that it has taken the necessary steps to listen to citizens during the days of the Eid Al Adha holiday through the mobilization of the team of 400 professionals.

ONSSA also makes its number (080.100.36.37) available from 8 a.m. to 8 p.m. to receive calls from citizens. The official ONSSA page on Facebook will also be available to receive complaints.

“The office recommends that citizens strictly comply with the preventive measures issued by the competent authorities,” ONSSA urged.

The measures include the hiring of a butcher with an authorization issued by local authorities, attesting that they have taken a COVID-19 screening test with a negative result. 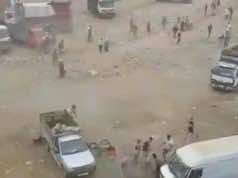 Morocco Arrests 20 for Livestock Theft, Violence at Market in Casablanca