A set of beaches in Morocco earned the Blue Flag benchmark for meeting international environment and management criteria.

Rabat – Morocco’s Bouznika beach, near Rabat, celebrated its 14th consecutive Blue Flag award on Tuesday. Every year since 2007, Bouznika beach has earned international recognition for its commendable cleanliness and management.

Mourad El Khalfani, head of the communication division at the National Office of Electricity and Drinking Water (ONEE) emphasized that the distinction rewards the efforts by the electricity office and its partners to provide a space suitable for summer visitors.

The ONEE official believes that the beach earned the eco-label thanks to the involvement of the electricity and water office and the commune of Bouznika.

Quoted by Morocco’s state media, El Khalfani said the city’s authorities installed signs at the beach of Bouznika with the aim of raising awareness among summer visitors amid the spread of COVID-19.

The signs aim to encourage beach goers to respect the precautionary and preventive measures that Morocco recommends to avoid the transmission of the virus.

In addition to the signs, the city also set up visuals at Bouznika beach to raise awareness of preventive measures, in accordance with the recommendations of the Mohammed VI Foundation for the protection of the environment relating to the management of health risks.

El Kharfani said the national water and electricity office also ensured the daily cleaning of the beach and its environment, the screening of the sand, the supply of trash bins and bags made of recycled materials.

Several local officials attended the Blue Flag award ceremony at Bouznika beach, including representatives from the Mohammed VI Foundation for the protection of the environment, as well as representatives of ONEE.

The Blue Flag is an international reward from the European Foundation for Environmentation Education (FEE) to celebrate seaside sites that meet criteria for quality and security.

Several Moroccan beaches earned the label this year. One of the latest to raise the Blue Flag was Dakhla’s Oum Labouir beach on August 12.

In July, the Mohammed VI Foundation announced that 26 Moroccan beaches along with the Saidia marina in easten Morocco earned Blue Flag labels this year.

The 26 beaches with Blue Flags in Morocco are members of the 4,664 certified clean beaches in 42 different countries. 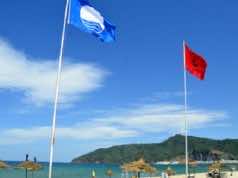