While Muslims around the world are celebrating the new year, we take a look at how the Islamic calendar came into existence. Rabat – Moroccans and many Muslims around the world are set to celebrate the first day of the new year of the Islamic calendar, also known as the Hijri calendar, on Friday, August 21.

Friday marks the beginning of year 1442 of the Islamic calendar and is a public holiday in most Muslim majority countries.

First established in the year 622 AD, the Islamic calendar consists of 12 lunar months, totaling 354 or 355 days per year.

In most countries, the calendar’s main use is now in determining the dates of religious events, such as Eid al-Fitr, Eid al-Adha, and the holy month of Ramadan. However, several countries, such as Saudi Arabia, use it as an official calendar.

The first year of the Islamic calendar marks the “Hijra” (migration) of Islam’s prophet Muhammad in 622 AD from his birthtown, Mecca, to Yathrib, currently called Medina.

The event holds special significance for Muslims, as it was after Hijra that Islam gained many followers.

According to Muslim tradition, Prophet Muhammad fled Mecca after God warned him of an assassination plot against him. The prophet only told his closest companions, Abu Bakr and Ali, of his plan to escape.

After a miraculous nocturnal escape from the tribe of Quraysh, Prophet Muhammad and his companion Abu Bakr hid in a cave outside Mecca. With a bounty on his head, the prophet stayed in the cave for three days before resuming his journey to Yathrib.

After the Hijra, Prophet Muhammad gained more supporters and Islam began to expand on a large scale in the Arabian Peninsula, as well as in Persia and Africa.

Muslims began using the Islamic calendar in the 17th year after the Hijra, approximately seven years after Prophet Muhammad died.

Prior to the establishment of the Islamic calendar, Muslims used a lunar calendar, with similar month appellations as the Islamic one. However, they did not numerically track years and only referenced them based on the occurrence of major events.

The most famous example of the years’ names is “A’am al-Fil” (The year of the elephant), which coincided with 571 AD and is commonly known as Prophet Muhammad’s birth year.

The year’s name derives from the story, mentioned in the Quran, of Abraha, a Christian ruler of Yemen. He marched upon Mecca with a large army, including war elephants, intending to demolish the Kaabah—Islam’s most sacred site.

However, according to the story, the elephants refused to destroy the holy site and a flock of birds dropped clay stones on the army to protect Mecca.

Establishment of the Islamic calendar

Muslims established the Islamic calendar under the reign of the second Muslim Caliph, Umar Ibn al-Khattab. The main reason behind the establishment of the calendar was the unprecedented expansion of the Islamic Caliphate, pushing Muslims to adopt a unified calendar for counting years.

Caliph Umar Ibn al-Khattab suggested the adoption of the Hijra as the start of the Islamic calendar, which all the prophet’s companions approved.

Another suggestion for the beginning of the Islamic calendar was the year Prophet Muhammad received his first revelations, in approximately 610 AD. However, the companions preferred the first option because the Hijra represented the actual birth of an Islamic nation.

When establishing the Islamic calendar, the companions had different opinions about what the first month should be. Many suggested the month of Safar, as it was the month when Prophet Muhammad migrated from Mecca to Yathrib.

In the end, they agreed on the month of Muharram because it comes right after the Hajj season—one of the most important annual rituals for Muslims.

Difference with the Gregorian calendar

Hijri years are 354 days, eight hours, and 48 minutes long—the duration it takes the moon to circle the Earth 12 times. This makes the Islamic calendar 11 to 12 days shorter than the solar Gregorian calendar.

The difference in duration makes the Islamic and Gregorian calendars unsynchronized. The two calendars mark a new year on approximately the same day only once every 33 years.

Through its over 14 centuries of existence, the Islamic calendar has documented wars and truces, births and deaths, and celebrations and mournings across the Muslim world. Today, in a multicultural context, it coexists with the civil calendar and connects Muslims with their eventful history and most sacred rituals.

Official Observation of the Lunar Crescent in Morocco Begins Wednesday 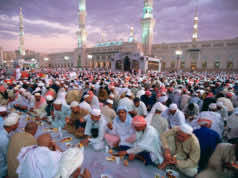 The Spirit and Teachings of the Hijri Year