The actress is among a generation of icons of Moroccan theatre.

Earlier in August, Jabrane was admitted to the Cheikh Khalifa Hospital in Casablanca after her health further deteriorated.

According to Touria Jabrane’s sister, Hayat, King Mohammed VI offered financial support to the actress to cover her medical expenses and insisted she receive the best care.

Hayat Jabrane announced her sister’s admission to the hospital on social media and thanked King Mohammed VI for the support.

“A great lady, a beautiful soul, fights today against the disease. Thank you Majesty for your support and generosity,” Hayat wrote on Instagram.

A career that transcends acting

In 1978, Jabrane played her first roles in television and cinema. Jabrane made her debut in cinema in the film “Omar Al Mokhtar.” Some of her most famous appearances were in the movies “Bamou” and “Noura.”

Since the late 1970s, the Moroccan actress made a series of appearances on television, notably in comedy roles. The joyful and funny characters she played made her an iconic comedian and earned her a special place in the collective memory of Moroccans who witnessed the early days of television.

In 2007, the then-head of government, Abbas El Fassi, nominated her as minister of culture. Jabrane worked as a member of the government for two years, until her health condition no longer allowed her to carry out her functions. 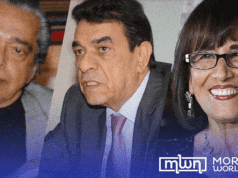