The two supermarkets in the city recorded a combined total of 100 COVID-19 cases among employees.

Rabat – Two Marjane supermarkets in the city of Marrakech have closed their doors after dozens of employees tested positive for COVID-19.

One of the markets recorded 60 cases, while the other registered 40.

The group said the decision to close the two markets “was taken as part of a new test campaign that the group has been leading on a large scale since August 1 as a preventive measure.”

The group said it has launched and financed a massive COVID-19 screening operation since the beginning of August.

“Marjane carried out a preventive campaign of more than 10,000 PCR tests for its employees, prioritizing citizens defined as sensitive by the authorities,” the statement explained.

The CEO of Marjane Group said in the statement that the mass COVID-19 tests are a “barrier instrument which makes it possible, by isolating positive cases, to prevent the spread of the virus.”

He added that Marjane is committed to helping limit the spread of COVID-19 and guaranteeing the safety of employees and customers in Marrakech and the rest of Morocco.

“We have therefore decided to massively and voluntarily use PCR tests,” he said.

The Marjane outbreaks add to the hundreds of new COVID-19 cases Marrakech has been recording in recent days.

The Marrakech-Safi region has recorded 8,590 cases since March, when the COVID-19 pandemic reached Morocco.

Marrakech is among the eight cities that Morocco suspended travel to and from last month due to the increase in the number of cases. The full list of cities includes Casablanca, Tangier, Tetouan, Fez, Meknes, and Settat.

On August 20, the government announced a decision to set up more intensified preventive measures to combat the pandemic in Marrakech and other cities such as Tangier and Fez.

In Marrakech, authorities closed 12 neighborhoods. The city’s security services also are strengthening checkpoints at the city’s exit and entry points.

Morocco has recorded a total of 53,252 cases of the virus since the start of the pandemic, including 37,478 recoveries and 920 deaths. Marjane To Source 80% of Private Label Products from Morocco 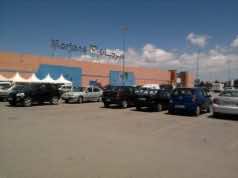