The photo dates back to 2015, when Morocco assisted the relatives of Spanish speleologists who died as a result of injuries from an accident in the High Atlas Mountains. 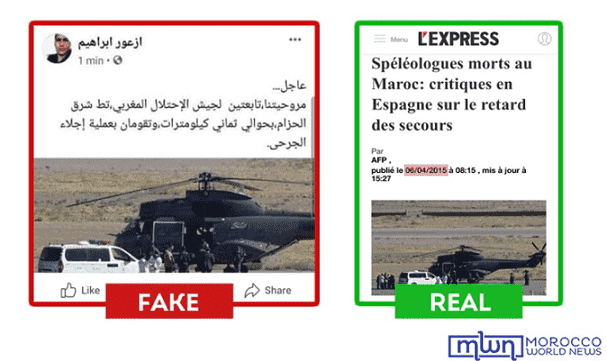 To back their allegations, the separatist group and Algerian media outlets also shared a misleading photo showing a helicopter and an ambulance.

Morocco World News analyzed the authenticity of the image and found that it dates back to 2015.

The image depicts a rescue operation Morocco launched in 2015 to save the relatives of two Spanish speleologists who died in Morocco. They had sustained fatal injuries during an accident in the High Atlas Mountains.

The Royal Armed Forces announced this morning that it mobilized its personnel late Thursday night to secure commercial and civil traffic after Polisario’s escalation in Guerguerat, a town near the Moroccan-Mauritanian border.

The Polisario Front encouraged protests in the region, a restricted area that the UN called on the separatist group to leave. The UN also called on Polisario and its supporters to refrain from any moves that seek to block traffic.

In defiance of all UN warnings, Polisario threatened war and expressed willingness to end the ceasefire.

Polisario attempted to attack Morocco’s defense wall in the sub-sector of Mahbes, a buffer zone in the region.

Le360 quoted a source close to the dossier that said Morocco’s army responded to the attacks with “anti-tank means” to neutralize Polisario’s violations.

Morocco’s Ministry of Foreign Affairs denounced Polisario’s acts in Guerguerat, saying that such maneuvers  “undermine the chances of any relaunch of the political process sought by the international community. Since 2016, the ‘polisario’ has multiplied these dangerous and intolerable acts in this buffer zone, in violation of military agreements.”

The ministry also regretted the unsuccessful intervention of MINURSO to urge Polisario to leave the region.

“Appeals from Minurso and the UN Secretary-General, as well as the intervention of several members of the Security Council, have unfortunately been unsuccessful,” the ministry said, adding that Polisario should shoulder responsibility for the consequences of its acts in the buffer zone.