Canada has commemorated several of Morocco’s national events over the years.

Rabat – The city of Toronto, Canada, raised the Moroccan flag on Wednesday, to celebrate the 65th anniversary of Morocco’s Independence Day.

The display also came to commemorate the 45th anniversary of the Green March on November 6, according to Morocco’s state media.

Due to the spread of COVID-19 and a recent surge in the number of cases in Canada, organizers of the event decided to cancel the ceremony that follows that annual raising of the Moroccan flag.

Toronto Mayor John Tory, the president of the Moroccan Association of Toronto (AMDT) Faouzi Metouilli, and Morocco’s Ambassador to Canada Souriya Otmani were set to attend the ceremony.

The Moroccan flag-raising takes place every year in Toronto to celebrate Morocco’s Independence Day and normally gathers the Moroccan diaspora in the Ontario province.

Despite the COVID-19-induced restrictions on the ceremony, Morocco’s national anthem played during the flag-raising.

AMDT President Metouilli said in a press release that the Moroccan flag is the symbol of a united, rich, and tolerant country.

“The fact that it floats on the metropolis also coincides with the celebration of the International Day for Tolerance which is held each year on November 16,” he added.

In addition, the city of Toronto proclaimed November as the “month of Moroccan heritage,” offering a number of activities to promote Moroccan culture and history, as well as the diaspora’s contribution to Canada.

The Canadian city of Toronto displayed colors of the Moroccan flag on the CN Tower on July 31 to commemorate the 21st anniversary of King Mohammed VI’s ascension to the throne.

Another remarkable display of the colors of the Moroccan flag at Niagara Falls took place on the same day.

Both events were organized in collaboration between Canadian authorities and the Moroccan embassy.

Morocco enjoys warm relations with the North American nation and a significant number of Moroccans reside in Canada.

The country’s Moroccan community is estimated at 160,000, of whom 40,000 are Jewish and 4,000 are students at different universities and training centers. 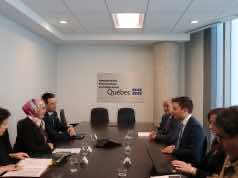