The Democratic Republic of Congo (DRC) is set to open a consulate general in Dakhla, southern Morocco.

The inauguration ceremony will take place tomorrow, December 19, in the presence of Morocco’s Minister of Foreign Affairs, Nasser Bourita, and his counterpart from DRC, Marie Tumba Nzeza.

Nzeza arrived in Rabat for an official visit on Thursday, December 17, and met with Bourita at the headquarters of the Moroccan Ministry of Foreign Affairs.

The two foreign ministers discussed several issues of common interests and expressed their satisfaction with the level of bilateral cooperation between their respective countries.

The consulate general in Dakhla will be the DRC’s second diplomatic representation in Morocco, after the embassy in Rabat.

The new diplomatic representation will concretize the country’s support for Morocco’s territorial integrity.

The move holds significant importance, especially as the DRC is soon to have a leading role at the continental level. The country’s president, Felix Tshisekedi, is set to become the chairman of the African Union (AU) from February 2021 to February 2022.

The sitting AU chairman, South African President Cyril Ramaphosa, is an opponent of Morocco’s cause in Western Sahara. In contrast, the DRC supports Morocco’s territorial integrity and was among the countries that voiced their support for Morocco’s recent action in Guerguerat, near the Moroccan-Mauritanian border.

On November 13, the Moroccan army carried out a non-offensive security operation to lift a three-week blockade that the separatist Polisario Group had staged at the Guerguerat crossing point.

Tomorrow’s inauguration will affirm the DRC’s support for Morocco’s sovereignty over Western Sahara.

The DRC consulate general will be the ninth foreign diplomatic representation in Dakhla and the 19th in Morocco’s southern provinces.

Two more countries, Jordan and the US, have announced their intention to open consulates in Morocco’s southern provinces but are yet to do so. 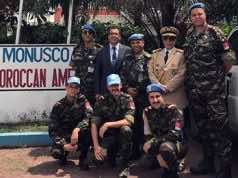