Rabat — The shift to renewable energy sources in Morocco will create up to 482,000 new domestic jobs over the next 20 years, according to a recent study from the Forum EuroMediterraneen des Instituts de Sciences Economiques (FEMISE).

The findings, which advocate for increased future partnership between the EU, Morocco, and Tunisia in pursuing shared environmental goals, explain the bulk of created jobs would be in the labor sector: high-skilled workers to build and maintain wind farms, solar plants, and other energy facilities.

Due to rising concerns over the effect of climate change in Morocco, the kingdom is currently prioritizing work to offset its environmental impact and to shelter the country from desertification, droughts, and rising sea levels.

Per Morocco’s National Determined Contribution — a non-binding domestic policy to stick to the guidelines outlined in the Paris Agreement — the country plans to invest around $35 billion in vulnerable industries including water, agriculture, and forestry over the next decade.

However, many question whether Morocco can truly curb the negative impacts of climate change without mitigative policy goals to reduce carbon emissions.

John Holdren, Harvard professor and energy advisor to former US President Barack Obama, explains the difference between adaptive and mitigative efforts in the fight against climate change.

“We basically have three choices: mitigation, adaptation, and suffering,” Holdren clarified. “The more mitigation we do, the less adaptation will be required and the less suffering there will be.

In late 2019, the European Union adopted the “European Green Deal,” a comprehensive set of policy initiatives to achieve carbon neutrality by 2050 through targeted investment, innovation, and mutual aid. The final prong of the plan urges EU member states to “work with international partners to improve global environmental standards.”

The European Council on Foreign Relations recently identified Morocco and Tunisia as “green partners” of strategic importance for the EU, highlighting the countries’ “strong historical and cultural relationship with European countries, which is probably stronger than that between Europe and other North African states.”

Many Moroccan businesses are already making waves in the renewable energy business. The Siemens Gamesa factory in Tangier, inaugurated in April 2017, manufactures and sells wind turbine blades both in Morocco and overseas.

Since 2017, the factory has directly created 600 new jobs within Tangier and has indirectly contributed to an estimated 500 more.

However, environmentalists are hopeful that recent findings highlighting the economic benefits of renewable energy could shift the dialogue surrounding climate change in Morocco.

Fadoua Brour, founder and president of the Moroccan Youth Climate Movement, shines a light on the important role Moroccan young people have played in fighting for climate justice.

“We need a generation that is fully committed, that understands the climate challenges, and that is passionate about taking action,” she said. 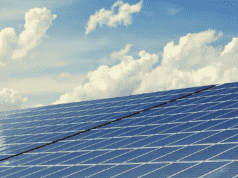