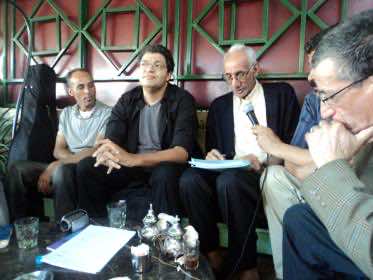 Fez – Poetry has always been known in the Arab world as one of the most important genres of literature.

It is a powerful means that men and women use to express their attitudes, views, describe their lives, show their emotions, and discuss various issues that are of concern to them and to the world. Poetry can also be used for more serious objectives such as calling for change. The world has known a salient event in many cities at the same time on the 24th of September 2011. Poets, across the planet, met in a demonstration/celebration of poetry to promote serious social and political changes. Morocco’s cities of Fez and Agadir were among the places where panel discussions were organized on this occasion.

According to Mustapha Bakkali, one of the organizers of the event 100 Thousand Poets for Change in Fez, “There have been 700 events planned in 550 cities and 95 countries on the 24 September 2011”.

All the poets who made it to the event said that they were happy and eager to participate and they didn’t feel reluctant to contribute to an event that is meant to unite poets worldwide. Some of them received the invitation from their poet friends, others were contacted by the organizer himself and others saw the event through the social network facebook and decided to join though they live in other cities, like the Moroccan poet Abedlhadi Said. Mr. Said stated that one of the most important reasons behind his coming to Fez is to participate and prove that the virtual world, which succeeded in changing the world and was the tool behind amplifying the echo and the impact of the revolutions taking place in the Arab countries, can also succeed to bring poets together to celebrate change in the world.

The event of 100 Thousand Poets for Change was organized at café Clock in Fez, named after the water clock that was built in the imperial city in the twelfth century. Not many poets were able to make it to the event but still it was a success. The audience, which was mainly of young people, enjoyed the performance of the poets who were attending like: Kacem Loubay from Khenifra, Ahmed El Inani from Fez, Ali Hajji from Fez, Abdelhadi Said from Rabat, Fatima Bouhraka and Ahmed Boumedienne from Fez. The Rolling Friends (a young musician band consisting of four members) and the musician Mohammed El-Ghazi also made the event very special by their great performances.

“The number of participants this year was very humble but as a first occasion for the event, we see it as a great success to be able to bring together this variety of distinguished Moroccan poets”, said Mustapha Bakkali. “We are hoping to attract more poets next year for this worldwide event”, he added.

Bakkali went on to say: “We had participants from Fez, Rabat and Khenifra and I personally believe that poetry can help to promote a deeper understanding and raise consciousness about current events and the striking issues the world is facing nowadays, thus helping make change for a better future.”

I believe if this event has anything to prove or to signify, it would be the passion of these great poets who wanted to make their voices heard. They were the centre of attention in a society that doesn’t encourage art activities. “Many festivals are being organized in Morocco but none of them support and care about us”, said Fatima Bouhraka in a sad tone.

Poetry can be both an expression of the self as well as a denial of it. It seems that poets, during their composition, look at themselves and their art differently. This was very lucid even in their way of performance. Some of them preferred to stand up to perform their poems, drawing a wide smile on their faces; meanwhile, others remained sitting in a corner, in which not everybody could hear and see despite the excellent work they have and the expressive words their poems hold.

When I asked the poets’ opinion about the situation of this genre of art in Morocco, the majority of them complained, if not to say everybody. “People don’t read. We, as poets, face a lot of obstacles in terms of publishing our work and distributing them in the market”, said Kacem Loubay, who has been writing for about forty years now.

Inani smiled when he heard my question and replied: “the real poet doesn’t care about which position he occupies in his society. The real poet is the one who can make a position to himself within himself, that’s what matters the most.”

While Ali hajji said, “You need support in Morocco so as to make your name known and voice heard”.

Abedlhadi Said’s answer was a bit diplomatic if not to say ironic when he said, “Yes, poetry is in the margins, but it is not that problematic. Poetry must live in the margins in order to exist.”

This worldwide event of 100 Thousand Poets for Change might urge us to think about the position of the Moroccan poet, itself, which necessitates some change first, until we can speak of a way that could allow poets to change the world.