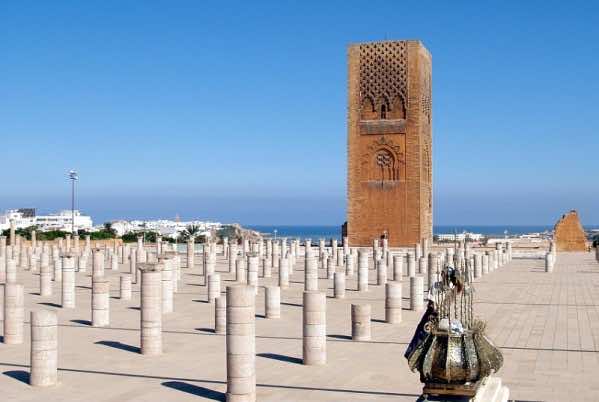 And the impressive and unfinished Hassan minaret, now referred to as the Hassan Tower is one of these monuments that make of Rabat, along with Fez, Marrakech and Meknes, an imperial city of the North African Kingdom.

The intimidating Hassan Tower is an incomplete minaret of the Hassan mosque that was intended to be the second largest mosque in the Islamic world in the 12th century after the mosque of Samara in Iraq.

The construction of this architectural treasure began in 1195, during the reign of the Almohad leader, Yacoub El Mansour, who reigned with distinction, from 1184 to 1199, and commissioned the building of several other great mosques, notably the Koutoubia mosque in Marrakech, Morocco, and Giralda tower, before it was converted into a cathedral bell tower in Seville, Spain.

The mosque was considered the cornerstone for establishing a new Muslim city. It was the first edifice to be erected at the center of a larger project that would include other surrounding buildings. The mosque was not only a place of worship, but also a learning sanctuary and meeting venue.

Today, the incomplete Hassan Tower, the vast marble floor, the left columns and the surviving walls indicate the huge dimensions of an unfinished mosque, that was intended to span over an area of 183 on 128 meters. History experts say the building of this colossal mosque, which was not compatible with the size of Rabat, then a small town, shows the Almohade leader’s ambition to make the city his new Capital, given its strategic location between the empire’s then capital city, Marrakech, and the Iberian peninsula, where large parts were under Almohade rule.

He also aspired to build a grand-scale mosque that would surpasses the great mosque of Cordoba which used to be, at the time, the capital city of the western Islamic world.

Soaring 44 meters into the sky, the Hassan Tower is an ultimate example of the breathtaking Moroccan Almohad architecture. This rectangular edifice, which was intended to be 88-meters high, reflects the reverence, which Moroccans had for mosques since the advent of Islam. It is no a coincidence that this reverence was manifested at the end of the 20th century, when the Hassan II mosque, one of the world’s largest mosques, with the highest Minaret (210 meters), was inaugurated in 1993 in Casablanca.

Towering above the Bouregreg River, the sandstone Hassan Tower measures 16 meters from each side and is ornamented from the exterior with magnificent Islamic calligraphy. The same beautiful patterns are noticed in the Giralda Tower in Seville, which used to be the capital city of the Almohad dynasty in the Iberian peninsula.

From the inside, the tower is ascended by ramps instead of stairs, which mirrors the architectural genius of the minaret. They allowed to use animals to carry heavy stones and building materials needed for the construction of the higher part of the tower. The same ramps would have enabled the Muezzin to ride a horse to the top in order to call to prayer.

Tradition says that Hassan Tower was commissioned by Yacoub EL Mansour and designed by an architect named, Jabir, who modeled it on the minaret of Koutoubia that he had designed earlier. The same architect supervised the building of the famous Giralda tower.

Today’s Giralda Cathedral in Seville was once a great mosque founded by Yacoub El Mansour. Its minaret, which still keeps the same Islamic calligraphy as Hassan Tower, was one of the highest buildings in the world. In the 16th century, it was converted into a bell tower as part of the long Reconquista process.

Hassan Tower, the Koutoubia minaret and the Giralda tower are three sister towers that strikingly embody the same features, which distinguish the Almohad minarets, notably the rectangular shape, the Islamic enchanting calligraphy and the unified design. They also manifest the great architectural and mathematical knowledge of the time, and the advanced building know-how of that era, when cities in Morocco and Muslim Spain were a showcase for civilized taste, culture and learning.

Yacoub El Mansour, who ordered the building of all these monuments, was named EL Mansour Billah (victorious by Allah), following his crushing victory in the battle of Allarcos, 1165, over Castilian King Alfonso VIII. During his reign, the Moroccan empire reached its heyday, stretching east as far as Tunisia and controlling large parts of modern-day Spain and Portugal.

Yacoub Mansour protected the Cordoba-born eminent Muslim philosopher Averroes (Ibn Rushd), who left long-lasting prints on western civilization, and wrote reference commentaries on most of the surviving works of Aristotel.

After Mansour’s death in 1199, construction of the Hassan mosque, which was almost materialized, came to a halt. In 1755, the hall of the mosque was destroyed by a violent earthquake whose epicenter was in the Portuguese city of Lisbon, which was raised to the ground. Only the unfinished Tower and some ruins survived this natural catastrophe, thanks to the solidity of its sandstones and the strong basis on which it stands.

The Hassan Tower is now one of the most prestigious historical monuments in Morocco. The eight-century old tower, adorned by charming gardens around it, was listed in 1995 as a world heritage by the UNESCO.

The magnificent incomplete tower and the impressive ruins of the Hassan mosque contrast the equally magnificent completeness of the neighboring Mausoleum, which was raised in tribute to the late King Mohammed V and contains his tomb in addition to those of his two sons, late King Hassan II and Prince Moulay Abdullah.

With its lofty green dome, the Mausoleum is a successful combination of the modern architecture and the traditional historical architecture of Morocco. The site is the main landmark of Morocco’s capital city that attracts tens of thousands of local and foreign tourists.