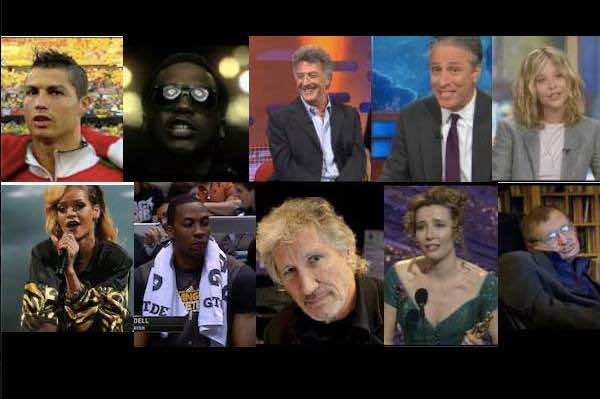 By
youssef sourgo
-
Youssef Sourgo is currently a Master’s student in Linguistic and Literary studies at Ain Chok Faculty of Letters and Humanities.
Jul 18, 2014
Spread the love

However, the political stances of some celebrities on the Israeli-Palestinian conflict must be noticed. Here is a list of celebrities you probably did not know were pro-Palestine.

The Portuguese football celebrity and Real Madrid’s superstar is believed to have shown his support for Palestine and condemnation of Israel on several occasions.

In 2012, a myriad of news sources reported Ronaldo’s 1.5 million-euro donation to the children of Gaza. According to many sources, Ronaldo donated the Golden Shoe he had been awarded in 2011 to the Real Madrid Foundation. The valuable shoe was then sold in an auction for 1.5 million euros, and the money was allegedly donated to the children of Gaza.

Moreover,  Ronaldo has allegedly refused to swap T-Shirts with Israeli footballers at the end of a match between Israel and Portugal in October 2013.

“I do not swap T-Shirts with murderers,” Ronaldo was quoted by many online news sources in 2013 as saying.

According to The Guardian, Lupe Fiasco didn’t vote for Obama because of the Democratic candidate’s “pro-Israeli” stance on the Israeli-Palestinian conflict.

In one of his very popular songs, titled “Words I Never Said,” Fiasco makes his opinion of Obama and the Israeli-Palestinian conflict clear:

“Gaza Strip was getting bombed, and Obama didnt say ****

That’s why I ain’t vote for him, next one either

I’m a part of the problem, my problem is I’m peaceful

And I believe in the people.”

Furthermore, Lupe Fiasco has also showed up to his concerts carrying a Palestinian flag.

Considered one of the world’s most influential and revolutionary physicists, Stephen Hawking has shown his support for Palestine and has condemned Israels on numerous occasions.

In protest of Israel’s policies towards Palestinians, the English physicist decided to boycott a conference held by the Israeli President in Jerusalem in 2013, which sparked a global controversy.

According to The Jerusalem Post, Hawking “retracted his statement that he pulled out of the fifth President’s Conference in Jerusalem because of ill health and clarified that it was because he supports an academic boycott of Israel.”

Hawking thus made official his support of the academic boycott of Israel. This was deemed an incontestable win for the Boycott, Divestment and Sanctions (BDS), which is a pro-Palestine global campaign that opposes Israeli policies towards Palestine.

British actress Emma Thomson is one of the few celebrities in cinema to speak out on global politics and international conflicts. In regards the Israeli-Palestinian conflict, Emma is known for siding with the Palestinians.

Emma Thompson has been a member of the British-based ENOUGH! coalition, aimed at ending the “Israeli occupation of the Gaza Strip and West Bank.”

“It shows the vital need for our ministers to make fresh moves for a just peace. It is high time the UK government matched its rhetoric with action which can save Palestinians and Israelis from another 40 years’ conflict,” she added.

Famed singer and songwriter Roger Waters, internationally recognized as the bassist and lyricist for the legendary rock band Pink Floyd, is among the first celebrities to have shown strong support for BDS.

“Scarlett,” Waters said on his Facebook page, “you are undeniably cute, but if you think Soda Stream is building bridges towards peace you are also undeniably not paying attention”

According to The Guardian, Hollywood actors Meg Ryan and Dustin Hoffman cancelled plans to attend a Jerusalem film festival following Israel’s raid on the Gaza-bound aid flotilla in 2012.

“Meg Ryan was supposed to come here, it had all been closed with her people,” said Molad Hayo, associate director of the Jerusalem Cinemateque, as quoted by The Jerusalem Post.  “A day after the flotilla incident we got an email saying she was not going to attend, and although they claimed it was because she was too busy, it was clear to me that it probably had something to do with what had happened.”

Jon Stewart is mainly known for being very critical of American news reports that are blatantly biased in favor of Israel.

In a recent episode of The Daily Show, an American TV program he’s been hosting since 1999, Stewart satirically, yet using visual evidence, harshly lampooned American news reports that have portrayed the recent violence in Gaza as a conflict between two supposedly symmetrical powers.

Stewart stated that while both sides are engaged in aerial bombardment, Israel has the necessary means of circumventing damages and blocking missiles and the Palestinians do not, and thus Gaza continues to suffer tremendous human and material losses.

While Israelis are alerted of impendent bombings via new technologies, Stewart sarcastically contrasted that Gazans are alarmed of imminent bombings “with a smaller warning bombing”, “an amuse boom, if you will.”

“Where do you want them to go?” Stewart questioned, referring to Gaza residents who are warned by the “small bombings” to leave their homes in escape of death.

“Are they supposed to swim for it?” he then asked, highlighting the impossibility of fleeing the danger of Israeli attacks even if Gaza’s residents were adequately alarmed.

In the wake of recent violence in Gaza, some celebrities have shown public support to the Palestinian people. Some of them, however, were quick to reconsider their public support of Palestine on social media, apparently due to the divisive nature of the matter.

On Tuesday, July 15, Barbadian superstar Rihanna tweeted #FreePalestine, stirring a commotion on social media. The controversy is still going on, even after the diva deleted the tweet shortly after posting it.

Rihanna then tweeted, “Let’s pray for peace and a swift end to the Israeli-Palestinian conflict! Is there any hope?”, shifting to a neutral, pro-peace position.

Rihanna’s justification for posting and then deleting the pro-Palestine tweet earlier was quite curious, however. A source close to Rihanna allegedly told the celebrity news website TMZ that “She [Rihanna] deleted it because it was never meant to be tweeted,” adding “she didn’t even realize it was a tweet until she started hearing from her fans.”

However, the justification Rihanna allegedly provided was not taken very seriously by the majority of readers, and her deletion of the pro-Palestine tweet 8 minutes after posting it has been described as “mysterious” and “strange.”

According to Buzzfeed, NBA star Dwight Howard tweeted and deleted #FreePalestine after he learned of the violence in Gaza.

The NBA star mysteriously deleted the tweet 15 minutes after posting it, but not as quickly as Rihanna did.

He then tweeted an apology for the pro-Palestine tweet, saying, “Previous tweet was a mistake. I have never commented on international politics and never will.”