New York - Besides books, and all that has to do with the alchemy of words, music is what I love most. Dance is music expressed through the body, said a wonderful teacher of mine. This idea fascinated me: dance as an incarnation of music. 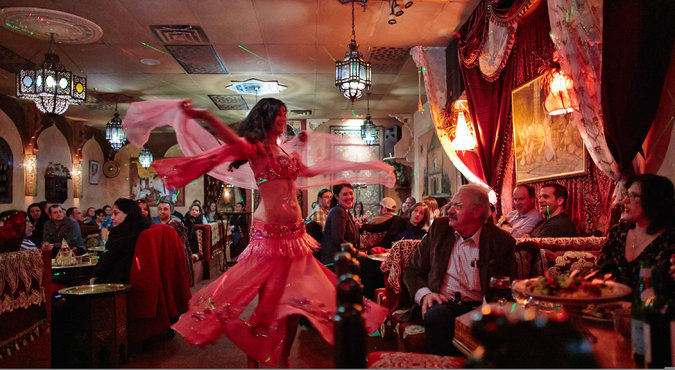 By
Paola Garcia
-
Paola Garcia is a writer and translator from Chihuahua, Mexico.
Mar 20, 2015
Spread the love

New York – Besides books, and all that has to do with the alchemy of words, music is what I love most. Dance is music expressed through the body, said a wonderful teacher of mine. This idea fascinated me: dance as an incarnation of music.

Through rhythm and harmony, human beings unveil the contents of their souls and fuse with others. Music and dance allow artists and their audiences to experience transcendence and a communion with the divine. In these art forms, the boundaries of time and space disappear and one travels into another world, a world of magic.

Music and its corresponding movement are also metamorphic and healing. Women who have experienced physical or emotional trauma, for instance, often find freedom and regain joy through dance. Belly dance is a great example for it has the power to infuse the artist with grace, and teach her to genuinely accept and love her body. In the enchanted sphere of dance, a woman is a goddess whose soul is heavenly and unfractured.

In the twentieth century, the world was blessed with the greatest and most famous contemporary Arab singer: Oum Kalthoum. Her nicknames say it all. She was, and forty years after her death, still is, the Star of the East, the Nightingale of the Nile, the Mother of all Arabs, Opium of the People, the Fourth Pyramid and even, the Sphinx.

Oum Kalthoum’s talent was dazzling. Her melancholic voice instantly seduces listeners, including those who, like me, don’t speak her tongue. Feelings have no language and Oum Kalthoum’s songs are simultaneously cathartic and intoxicating.

If you don’t speak Arabic I recommend finding the translations of her lyrics, not because they are necessary to feel her music, but simply for the sake of their poetry. Oum Kalthoum’s songs are ardent love stories and sensual words of yearning. They are poems set to music, many of which were written for her by Ahmad Ramy, a poet who loved her in vain his whole life and whose love the entire country of Egypt, and later, much of the world, came to share:

I discovered Oum Kalthoum eight years ago when I was engaged to a Tunisian man who loved her music (and music in general) very much. I became addicted to her melodious laments and to the magnificence of the Arabic language as expressed in music and poetry. I instinctively preferred the classical songs, and liked traditional chaabi, or popular music, from many different countries. People are surprised to discover that a non-Arab knows and loves music ranging from the Gulf countries, to Palestine and Jordan, Lebanon and the rest of the Levant, all the way to Egypt, Tunisia and Morocco. I also like some of the modern Arabic pop singers, but not nearly as much.

Arabic music has a hypnotic effect on me. Lost in its cadences, the world becomes poetry and all of life is soaked in intense, noble emotions and deeply meaningful experiences. Music, like books, helps me discover that there is hope even in the worst of circumstances and that life is always worth living.

I believe music is God’s universal language and one of His biggest forms of mercy to humanity. Music is a bridge across cultures that unites us at the deepest core of our humanity, going underneath the layers of language, beliefs, and prejudices that divide us.

After falling in love with Arabic music, I became interested in the dance that accompanies it. And so, I began exploring different styles of belly dance, from Turkish to Egyptian (I prefer Egyptian). I also read about some of the legendary belly dance stars of the past. In Edward Said’s “Reflections on Exile,” for instance, I got to meet Tahia Carioca, who Said describes as “the finest belly dancer ever.”

Tahia’s debut happened in Cairo in 1936 at King Farouk’s extravagant wedding party, where Oum Kalthoum also performed. Tahia had an understated allure and her economy of movement reflected “the essence of the classic Arab belly dancer’s art.” How little, rather than how much an artist moves is the key to classical belly dance and “only the novices or the deplorable Greek and American imitators go in the appalling wiggling and jumping around that passes for ‘sexiness,’” writes Said.

Besides being a dancer, Tahia was a star in hundreds of Egyptian films between the 1940s and the 1980s. I have watched several dance clips from these movies and find her elegance and grace remarkable. There are none of the acrobatics, gliding across the floor, or oriental version of striptease that we often see today in cabarets across the world.

Throughout her performances, Tahia was poised and dignified, yet exquisitely feminine and seductive. She was widely respected and liked in an Egyptian society that treated, and still does, belly dancers “as barely a notch above prostitutes.” Edward Said explains that Tahia belongs “to the world of progressive women skirting or unblocking the social lanes.”

I believe the value and beauty of belly dance lie in its connectedness, in the authentic feelings the artist communicates through her subtle movements rather than in a display of extravagant but disembodied motions calculated to produce a particular effect on the public. This last style of performance cheapens and effectively ruins the dance because of lack of sincerity, absence of feeling and thus of real art.

In art, as in all of life, intentions and feelings are most important. A false, disconnected or shallow human being can never be a great artist, regardless of how good his or her technique may be. Dr. Sultan Abdulhameed writes that “in everything we are doing, we connect with the heavens through our intentions.” And in few things can we witness intentions as palpably as we do in dance and music.