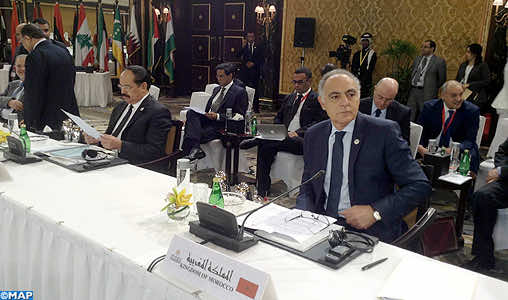 Morocco will spare no effort to remain in the vanguard of the countries which defend the just causes of South countries and continue to endeavor for their vital interests at the multilateral level, notably at the United Nations and dialogue forums between Arab countries and numerous world powers, such as the Arab-Indian cooperation, Mezouar said at the Ministerial Meeting of the Arab-India Cooperation Forum in Manama.

He stressed that India’s pioneering development model and its responsible foreign policy, which is based on respect for international legitimacy and the territorial integrity of States, makes of it a reliable partner for Arab countries.

The first Ministerial Meeting of the Arab-India Cooperation Forum took place in Manama, Kingdom of Bahrain, with the participation of Foreign Ministers of Arab States, Minister of External Affairs and Overseas Indian Affairs and the Secretary General of the League of Arab States.