AN ETHNIC FOOD: TABADIRT or ABADIR

AN ETHNIC FOOD: TABADIRT or ABADIR

Fez – Luciano Pavarotti famously said “One of the very nicest things about life is the way we must regularly stop whatever it is we are doing and devote our attention to eating.” From this quote, one’s mind is set on tenterhooks if one does not eat; that is, one will continue seeking to set it to rest at all costs, instead.

Whenever one yearns for tranquility, one will naturally commence to considering how best to enjoy it to the fullest. In so doing, people’s imagination takes hold of them and starts them to pondering the techniques their ancestors used to ameliorate their lives with pleasure, whether it be from what they ate or how they prepared it. Indeed, Tabadirt epitomizes much more than just a meal outside of one’s home per se. 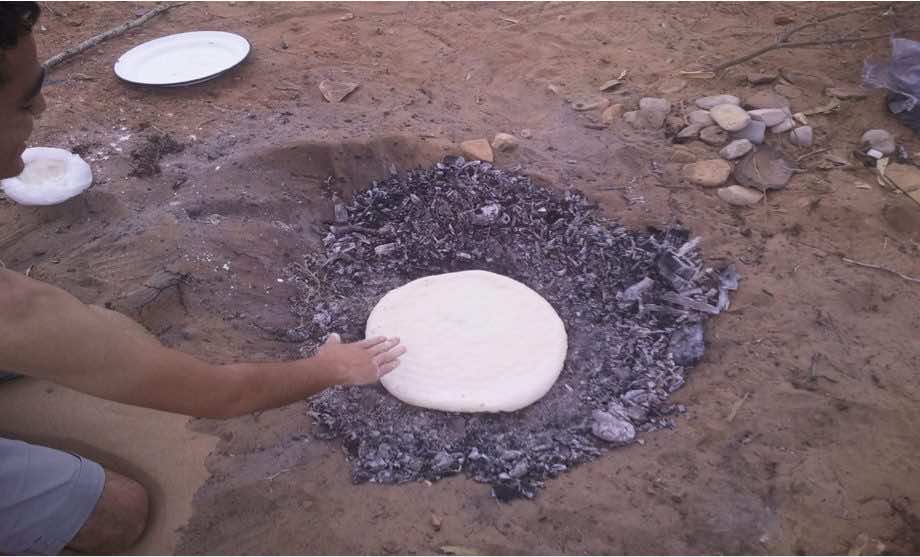 This is the first step, after getting the ground ready.

Evidently, Tabadirt or “Amazigh pizza,” a name given to it by youth comparing it to mainstream pizza, comes from the Ait Atta, the largest group among Morocco’s various tribal communities and one which has resided in Morocco for centuries. It is named after Dadda Atta, the father of this ethnic group hailing from the South East of Morocco. Not only have Ait Atta prepared this sort of food, but other neighboring ethnic groups as well, such as Ait Merghad, Ait Yeflman, and Ait Hdido, who pervade in the high Atlas. Whether prepared by man or woman, this food demands that one be equipped with ample cooking skills far beyond those used at home.

The process of its preparation incorporates four main steps. The first is to meticulously collect many small round stones for use on the ground as a carrier that prevents the dough (which should already be kneaded at this point) from touching the dirt. The second step is to stuff the dough with ingredients prepared ahead of time at home. These ingredients are varied, but may include eggs, meat, onions, tomatoes, carrots or spices typically strong in smell and test.

The third step requires collecting a particular sort of sand for use after the dough has been flattened upon hot stones by means of burning wood over it. Fourth, the dough is covered altogether with clean sand and wood, commonly found in the valley, is burned on top of the layer of added sand. Indeed, when it’s thoroughly cooked it becomes brown and can satiate the hunger of nearly ten people. In the end, even though Tabadirt is a demanding task, it is a food of full flavor.

The second step involves burning wood on the surface of the Tabadirt.

Whenever Tabadirt is mentioned, it usually occurs to him or her that it’s a thing associated with the desert. By all means, this type of food was found ab initio within nomad daily life. These nomads invented this food to serve themselves energy, time and space. In essence, Tabadirt is a threefold concept. As far as energy is concerned, it is due to Tabadirt’s ingredients which are very effective in fighting hunger and it is concomitant with maximizing the extents of endurance.

Regarding the time it takes to prepare, it is important to understand its secret. To wit, during the day(especially at noon), is the best time to have Tabadirt, whether alone or in concert with others. The reason behind this specific time of day is related to the nomad’s economizing of food for the whole day.

With a shortage of sustenance, they are still capable of maintaining strength for other necessary yet demanding and energy-depleting tasks like water-bringing and animal-milking. In the eyes of the nomad, space is indisputably a consequential segment in day-to-day life. Add to this, water and grass available in a particular area are the paramount, if not sole, criteria a nomad relies upon to live; in their absense, they must retreat en masse, quickly, for a better life in the service of the family and animal husbandry.

Furthermore, these factors, when combined, are sufficiently conducive to unravelling the symbolic mystery of the Tabadirt within nomad culture. During the meal, a circle is formed around the circular shaped dish; while the shape of a circle, itself, signifies life and a moving element, such as Ahidus dancers during play[1]. Indeed, Tabadirt is viewed as a source of mutual strength, joy and equality among family members; and an opportunity to gather and properly organize the rest of the day. 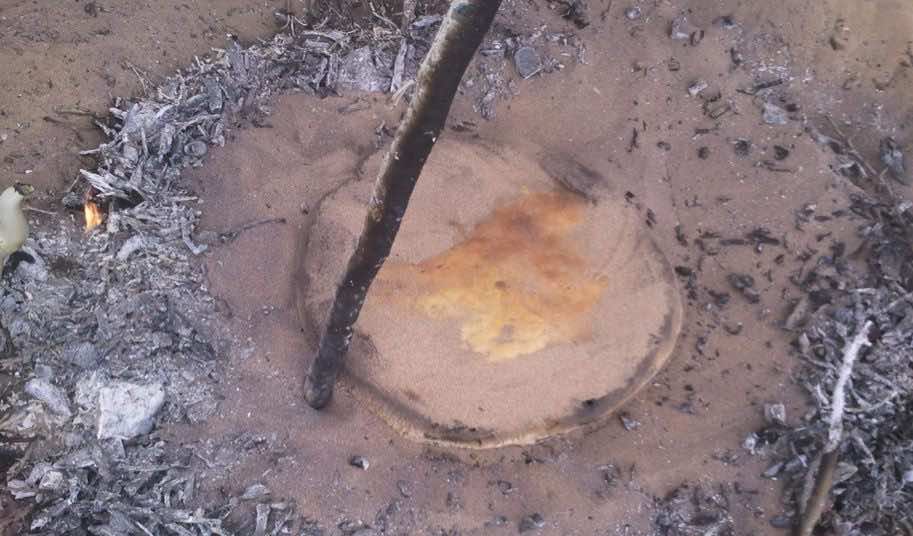 The third step is crucialinensuring the amount of heat used to cook the Tabadirt.

Tabadirt in the social context

Any food, in any culture, has a story behind its emergence. Tabadirt, in the Amazigh nomad culture, is no exception, and has i made history with its special story. Tabadirt, as an Amazigh ethnic food, basically originated from nomad culture, although it has recently been domesticated upon the morrow of urbanization, migratory factors also at play. This latter circumstance clearly contributes to the relegating of food to be prepared in the home, and cause for our unfamiliarity of its aroma in an outdoor setting. In addition, Tabadirt, in common with other such foods, has recently been rendered a highly substantial meal, suitable for generously serving one’s guest(s).

This meal speaks candidly for itself when introduced during celebratory occasions of particular ceremonies. For example, in some cases, a newly married bride, in order to reveal whether she is indisputably adept at cooking or not, typically is given the option of preparing Tabadirt to gain recognition from the family, leaving aside her beauty or elegance In this way she is sure to gain favor from the newly received family. At present, it is furthermore served in concomitant with a pot of tea. It is customary to heat the tea upon the coals of the burnt wood used for the Tabadirt. As a highly recommended food for special occasions, it has recently been in demand. Essentially, Tabadirt is one of the contributions from the Amazigh culture as a whole, and in particular, the nomadic culture which made history with it.

In conclusion, the most precious gift parents can offer their children(especially their daughters), in regards to instilling pride in their roots or family unit, is the sense of culture, whose food represents that which their ancestors had created and lived on. Additionally, the first impressions from a host family, after matrimony, attesting to the eligibility and credentials of the bride are nothing other than her cooking skills; owing to the belief that the attainment of a man’s heart is by all means through the feeding of his stomach.

Note to the reader

The linguistics of Amazigh are very important in making a clear distinction between feminine and masculine nouns. To feminize masculine nouns, such as Abadir, the consonant “T” is usually added to both the beginning and end of the word; in this case yielding Tabadirt.

The words for boy, Arba (Tamazight), Afrokh (tashlhiyt) and Ahn(d)jir (tarifiyt), are transformed into Tarbat, Tafrokht and Tahnjirt to mean girl. Throughout this passage, the word “Ait” is used to signify a group of people; such as Ait Atta for the Atta people, and Ait Mellol for the people of Mellol. In consideration of these clarifications, it should be noted that the Amazigh language is by no means a sexist language.