Rabat - Delta Airlines has confirmed that YouTube personality Adam Saleh and his friend were escorted out of a plane headed to NYC after 20 passengers complained. 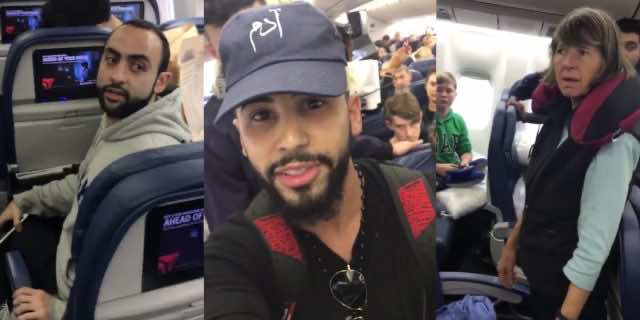 Rabat – Delta Airlines has confirmed that YouTube personality Adam Saleh and his friend were escorted out of a plane headed to NYC after 20 passengers complained.

Adam Saleh uploaded a video to various social media channels capturing the incident, during which he was kicked out of a Delta Airlines plane. The video was posted on Facebook with the caption: “We got kicked out of a Delta airplane because I spoke Arabic on the phone with my mom and to my friend slim…. please help spread the word.”

Saleh, who is quite visibly upset in the video, explains, “We spoke a different language on the plane and now we’re getting kicked out.” He appears to be shocked by the situation as he exclaims, “This is 2016!”

While Saleh is being escorted out of the plane by Delta staff, other passengers can be seen waving him off as they shout, “Bye!” As Saleh turns the camera around to show other passengers, it can be seen that only one passenger speaks out to defend Saleh, as others just stand by. “I cannot believe my eyes, six white people against two bearded men,” Saleh says in the video.

During the incident, Saleh kept his followers updated via Twitter:

We are still stuck at the airport and Delta has not given us any info. They keep telling us to wait. Please spread the word #BoycottDelta

UPDATE: were now on another flight with a different airline heading to NYC after being checked for 30 minutes. We land 5:50pm in NYC

With a large following of over 2.2 million subscribers on YouTube and more than 715,000 likes on Facebook, the story was picked up instantly. The video, which was primarily shared by Saleh on Facebook, was shared more than 282,000 times and viewed by more than 8.8 million people. On Twitter, the video has been retweeted more than 20,000 times, with the hashtag #BoycottDelta now trending on Twitter.

More than 420 million people speak Arabic, its the 6th most spoken language in the world… @Delta wtf is your problem #BoycottDelta

How often does this happen and it goes unreported/undocumented. Not everyone is a successful youtuber with a large following.#BoycottDelta

In response to the incident, Delta Airlines tweeted: “Two customers were removed from this flight and later rebooked after a disturbance in the cabin resulted in more than 20 customers expressing their discomfort.”

“We’re conducting a full review to understand what transpired. We are taking allegations of discrimination very seriously; our culture requires treating others with respect,” the statement continued.

@jnambowa …customers expressing their discomfort. We’re conducting a full review to understand what transpired. We are taking… 2/3