Rabat - Gunshots and panic are being reported in the Notre Dame area of Paris, according to police.

Rabat – Gunshots and panic are being reported in the Notre Dame area of Paris, according to police.

Police have responded to reports of gunfire and mass panic at the site of the famed Notre Dame cathedral in Paris.

People are being instructed to stay clear of the area.

Very early reports claim that a man attacked a police officer with a hammer. The suspect is reported to have been shot dead by police.

France has been in a state of emergency since a terror attack in 2015 left 130 people dead.

This is breaking news and will be updated as soon as soon details are presented. 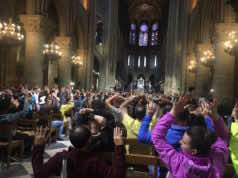