Rabat - Often described as “the world’s most persecuted minority,” the Rohingya Muslims are suffering a systematic cleansing by their own government in Myanmar. While some have spoken up and condemned the persecution of the one million-member minority, others remain silent or even justified the crimes. 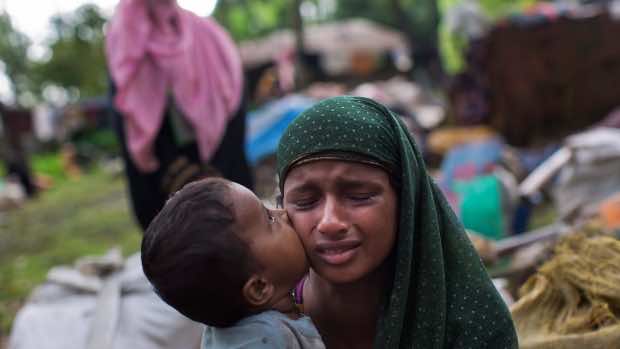 Rabat – Often described as “the world’s most persecuted minority,” the Rohingya Muslims are suffering a systematic cleansing by their own government in Myanmar. While some have spoken up and condemned the persecution of the one million-member minority, others remain silent or even justified the crimes.

Tension continues to grow in Myanmar’s Muslim majority Rakhine State. Since August 25, it is estimated that the clashes between the military and the Arakan Rohingya Salvation Army (ARSA) have lead to the death of at least 400 people, the destruction of over 2600 villages, and the displacement of more than 90,000 Rohingya to Bangladesh.

Without foreign intervention, many believe that what Reuters has described as the “deadliest bouts of violence involving the Muslim minority in decades” will only continue to grow.

Between complicity and conspicuous silence, it appears that the government of Myanmar will not take any action to stop the violence.

The mass killings of Rohingya Muslim community are, according to the country’s security forces,“clearance operations of terrorists,” referring to ARSA, and Myanmar’s army chief has justified the genocide as “unfinished business.” 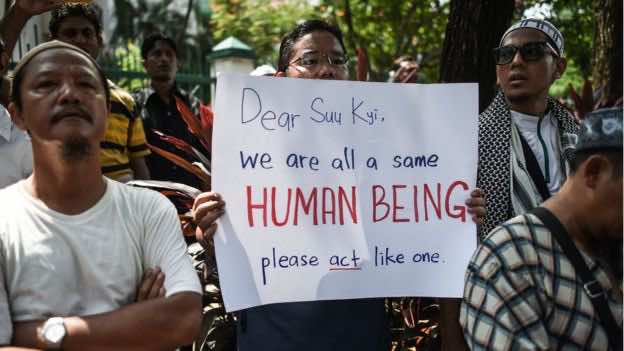 Some have defended Suu Kyi, saying is incapable of stopping the violence against Muslims in Rakhine since because she does not have control over the military.

However, Suu Kyi has herself previously displayed a negative attitude regarding Muslims in Myanmar. 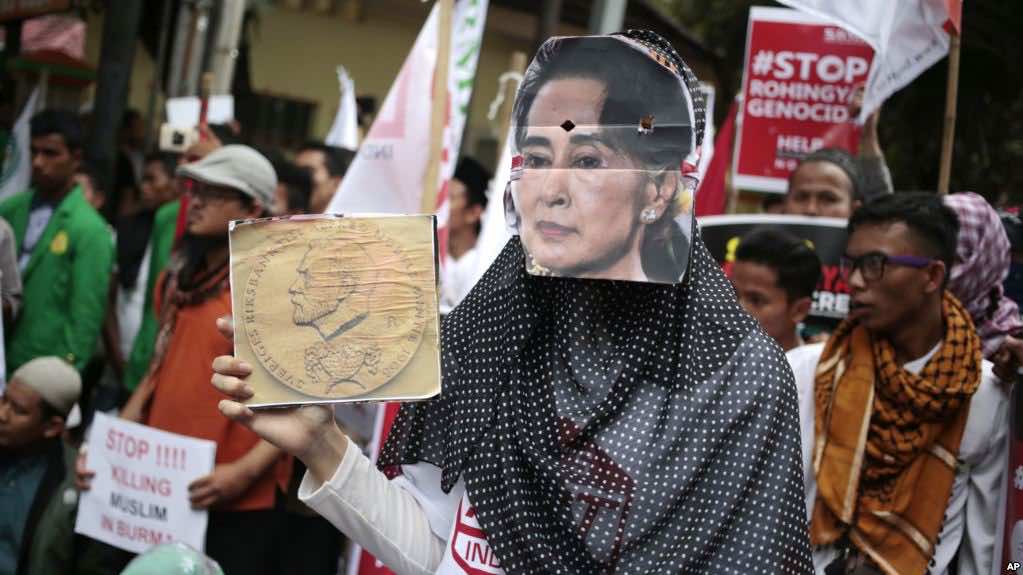 During an interview in 2013 with BBC journalist, Mishal Husain, concerning the ethnic cleansing of Rohingya, Suu Kyi said that “the world needs to understand, that the fear is not just on the side of the Muslims, but on the side of the Buddhists as well.”

Following the interview, Suu Kyi reportedly said that “no one told me I was going to be interviewed by a Muslim.”

Suu Kyi is not the only head of state that has refused to discuss the persecution of the Rohingya. Several countries have remained silent while continuing to supply arms to Myanmar, despite the ongoing violence.

Russia has yet to make a statement regarding the genocide in Myanmar. Russia and Myanmar governments share deep rooted trade and arms partnerships. In 2016, Russia signed an agreement of military cooperation with the Myanmar military, increasing its readiness for battle.

Nevertheless, the country’s Muslim community in Chechnya have rallied in support of Rohingya Muslims. 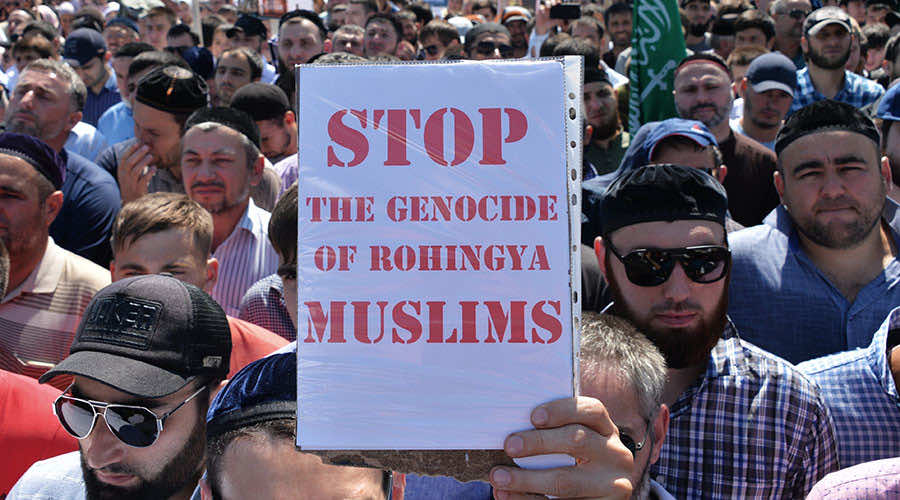 In a YouTube Video, Chechnya leader Ramzan Kadyrov said that “if […] Russia supported these devils that carry out the crimes today, I am against Russia’s position because I have my own views and my own position.”

However, the leader is not willing to take any concrete measures to put an end to the violation of the human rights in Myanmar, as it is not possible for him to send Chechen armed police as military to protect the Rohingya because of “geography,” and “circumstance.”

Israel is also a longstanding trader of arms with Myanmar government.

The Israeli Defense Minister, Avigdor Lieberman argued that trade of arms with the Myanmar is “clearly diplomatic.”

Lieberman indicated that Israel merely “subordinates [itself] to the entire enlightened world, that is the Western states, and first of all the United States, the largest arms exporter. We subordinate ourselves to them and maintain the same policy.”

While Lieberman’s statement is incorrect – the US has imposed an arms embargo on Myanmar –President Donald Trump nevertheless has yet to make any condemnation of the attacks in Myanmar.

The US ambassador to UN, Nikki Haley, made a statement, “condemning recent coordinated attacks by Rohingya militants on security posts,” but did not mention the Myanmar military violent persecution of the Muslim minority. She said that “government forces have a responsibility to avoid abuses and allow in aid.”

No to Violations of Human Rights

While some world leaders and official bodies have chosen to remain silent, many others have condemned the massacre of Rohingya Muslims and the inaction of the Suu Kyi.

On Monday, Pakistan Foreign Minister Khawaja Muhammad Asif urged for “effective measures to prevent the recurrence of such violence” against the Muslim minority.

His counterpart in Iran, Javad Zarif condemned in Twitter the “Global silence on continuing violence against Rohingya Muslims. Action is crucial to prevent further ethnic cleansing – UN must rally.”

In a statement to AFP, Malaysian Foreign Minister Anifah Aman also urged Suu Kyi to face the tragedy. “Very frankly, I am dissatisfied with Aung San Suu Kyi. She stood up for the principles of human rights. Now it seems she is doing nothing.”

Nobel peace laureate Malala Yousafzai wrote on Twitter that “Every time I see the news, my heart breaks at the suffering of the Rohingya Muslims in Myanmar. Over the last several years I have repeatedly condemned this tragic and shameful treatment. I am still waiting for my fellow Nobel laureate Aung San Suu Kyi to do the same.”

My statement on the #Rohingya crisis in Myanmar: pic.twitter.com/1Pj5U3VdDK

Turkey’s President Recep Tayyip Erdogan said on Monday that while “humanity remained silent to the massacre in Myanmar, [he is] pressing world leaders to do more to help the Rohingya, facing the genocide.” Turkey promised to raise the issue at the United Nations General Assembly in New York.

The Maldives foreign ministry said on Monday that it has cut all trade ties with the country, until “the government of Myanmar [begins] taking measures to prevent the atrocities being committed against Rohingya Muslims.”

Saudi Arabia’s mission to the United Nations responded in a tweet, condemning the recent attacks on Myanmar’s Muslim Rohingya minority.

“Acting upon KSA responsibility as the leader of the Islamic Ummah. Saudi Arabia has called for a resolution to condemn the atrocities and human rights violations committed against the Rohingya Muslim minority in Myanmar,” said the tweet.

Al-Qaeda in Yemen and the Taliban in Afghanistan also announced their support of the Rohingya Muslims.