Rabat - Salaheddine Mezouar, the president of the United Nations climate change conference COP 22 and a former Moroccan foreign minister, received on Wednesday in Barcelona an award for his pioneering work in promoting sustainable development in the MENA region. 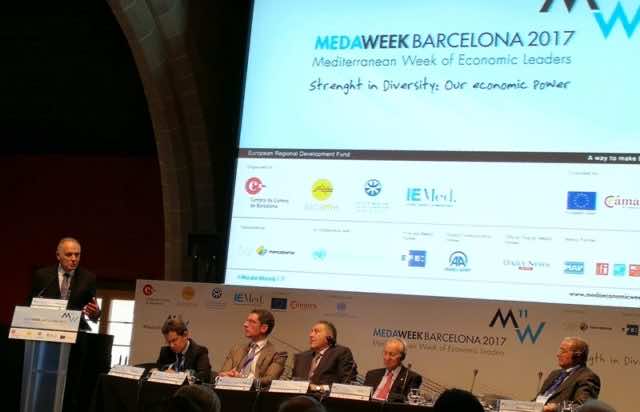 Rabat – Salaheddine Mezouar, the president of the United Nations climate change conference COP 22 and a former Moroccan foreign minister, received on Wednesday in Barcelona an award for his pioneering work in promoting sustainable development in the MENA region.

The award was given to Mezouar by the Association of the Mediterranean Chambers of Commerce and Industry (ASCAME) during the 2017 MedaWeek, which is taking place in Barcelona November 22 to 24.

The prize also recognized Mezouar’s actions during COP22, which was held in November 2016 in Marrakech.

The event, which is taking place at Casa Llotja del Mar, has gathered more than 1,000 entrepreneurs from 35 countries to take part in several thematic forums and more than 60 working sessions.

Mezouar said he was honored to receive the ASCAME award as president of COP22, reported Maghreb Arab Press (MAP). He added that this award is an honor for Morocco first, as well as for all teams that mobilized to make the conference successful, as many countries and organizations recognized.

“This distinction is also an acknowledgement of the efforts made and the progress made by Morocco under the leadership of King Mohammed VI,” he told MAP.

During Wednesday’s ceremony, ASCAME awarded other prizes to both officials and institutions from around the Mediterranean in recognition of their efforts to promote economic development of the Mediterranean basin.

MedaWeek 2017 has been organized by ASCAME, in partnership with Barcelona’s Chamber of Commerce, the Union for Mediterranean (UFM) the European Institute of the Mediterranean (IEMed) as well as many international firms, including the United Nations Industrial Development Organization (UNIDO).

Economic development in North Africa, Islamic finance, and the textile sector are among the topics covered in the event.