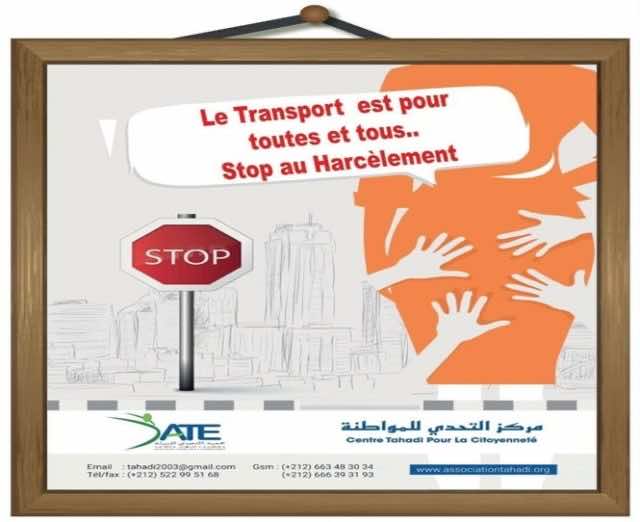 The association is organizing a large campaign under the title, “Do not harass me, the public transportation is for you and me,” across the city, which recently saw the horrific sexual assault of a disabled woman on a bus.

Bouchra Abdou, director of Tahadi Center which is affiliated to the association, told Morocco World News that the campaign was created in conjunction with the 36th annual International Day for the Elimination of Violence against Women and the 16 Days of Activism against Gender-based Violence.

The initiative came in response to “the daily struggle that face women, especially those who use public transport,” said Bouchra, referring to all sorts of public services, including taxis, buses, the tramway, and trains.

She added that the campaign is so far unable cover the whole of Morocco. Therefore, the association focused only on Casablanca, where the phenomenon of sexual harassment is very common, especially in buses.

The association study, which surveyed 200 women shows that harassment affects women of all ages. About 5 percent of harassed women are over 60, while 12 percent of women are under 18. Women 19 to 39 account for 54 percent of the victims.

The survey added that 20.8 percent of women are looking after their families, while 55 percent of the households are either widowed or divorced. The study added that most of these women are obliged to use public transport, including unauthorized alternatives.

Some forms of harassment verbal include verbal harassment of a sexual nature, unwanted touching or physical contact, and unwelcome sexual advances.

The association’s initiative seek also to defend the right of men who are exposed to violence. “There will be awareness meetings with women and in schools led by the association in order to bring attention to the danger of this phenomenon,” added Bouchra.

Bouchra also explained why women often do not press charges against abusers. She said the majority of women feel ashamed or afraid of being held responsible for their own sexual harassment. For Bouchra, women should talk about their experiences, calling them to urge the government for a law that would end violence and all sorts of harassment against women.

In August, graphic footage of a gang of boys sexually assaulting a young disabled women being sexually assaulted on a public bus in Casablanca was widely shared on social media. Showing six teenagers insulting and manhandling the woman tearing off her clothes, the video sparked outcry across Morocco.

In response, women of all ages took to streets in Casablanca and Rabat in a show of solidarity with the victim.

The teenagers were arrested after the incident, though the victim did not file charges against them.