Rabat - Foreigners visiting Morocco are not attracted, in the least, by Casablanca  and common Moroccans are always baffled by that attitude and want to know, why on earth, they do not like this modern and sophisticated city, but they, generally, do not get any satisfactory answer. 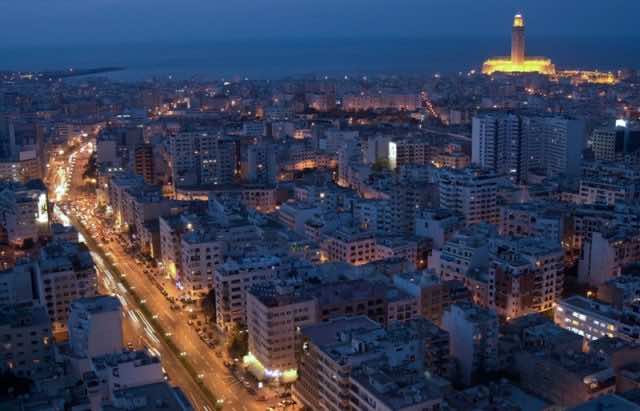 Rabat – Foreigners visiting Morocco are not attracted, in the least, by Casablanca  and common Moroccans are always baffled by that attitude and want to know, why on earth, they do not like this modern and sophisticated city, but they, generally, do not get any satisfactory answer.

In reality, foreigners seek traditional Moroccan culture, to get to know better the country, its soul and way of life and they are, also,  after exotic experiences, which Casablanca is, alas, unable to offer at all.

For the locals, it is the biggest and the most modern city, for visitors it is the noisiest, dirtiest, most chaotic and most crazy place. It reminds them of their bustling big cities, but riddled, on top of that, with more woes, such as: pollution, heavy traffic, lack of transit transportation and complications of modern life, minus attractive traditional vestiges of magnificent millennial Morocco.

By camparison, Kuala Lumpur, the capital city of Malaysia, which is also very modern, is very clean, organized and very friendly. It has an excellent road network, an attractive and functional mass transit transportation system, a lot of greenery, many well-structured and designed malls, beautiful parks and countless cheap eating places, but most importantly it is safe day and night, with places and attractions open around the clock.

Foreigners are almost considered as sacred visitors. The local government always makes sure that visitors are well treated, to ensure that they come back over and over. Not far from Kuala Lumpur, there is Singapore, this city-state with a mighty economy where visitors are treated like gods, to say the least, and they always get their money’s worth in accommodation, food, shopping, hospitality and quality of stay.

What is wrong with Casablanca?

What is wrong with Casablanca? Honestly, almost every thing. The city is basically two cities: the costal part rich and affluent and the surrounding part poor and unruly. The poor work during the day for the rich in their homes, businesses or factories and retire at night in their insalubrious shanty towns to take drugs, watch tasteless TV programs, to while away the time, or just indulge in making babies to have some fun and forget about their daily misery and mistreatment.

They are underpaid, looked down at and, often times, loathed by the rich, to say the least. So lots of them, in times of crisis, resort to petty crime to feed their families or just to take revenge on the selfish and hateful well-to-do citizens of the city.

In a word, Casablanca is a bizarre place, not to say a city suffering from schizophrenia and double identity. The national government is more interested in security, bearing in mind, mainly, that in the past it was the hotbed of leftist militantism and in 2003, it was rocked by Islamist terrorism originating from its own belt of poverty, Sidi Moumen’s bidonville.

An excellent film was made by Nabil Ayouch on this particular event; It is entitled: “ Horses of God.”  As for the local government, it is most of the time, embroiled in partisan feuds, a state of affairs that keeps the city development on its  back burner, not to mention that often times members will initiate programs that might not be feasible or beneficial for the city, in the long run, but friendly to their own pockets and interests.

As such, the roads are very bad everywhere; full of potholes and the ugly sidewalks invaded by wild car-parking pushing the pedestrians to walk in the roads and, thus, are victims of terrible car accidents given that drivers are careless and have no respect for the walking public. Greenery is almost inexistant because the blocks of cements of voracious urban developers have duly invaded every possible green space.

During the day the city suffocates and asthma is very high among the population, especially the young of age and babies. Traveling during work days from one part of the city to another is almost impossible because of horrendous traffic jams and unpleasant bottlenecks.

The city has not planned ahead of time for the increase of vehicles. Some business people make their business decisions while being chauffered to their companies’ headquarters.

City of inhuman and wild capitalism

The city is gripped by this modern malady called inhuman capitalism: people want to make money fast at whatever price and in the process they lose their humanity, sense of compassion and the virtue of sharing and become fast- gain zealots: wild, inhuman and terribly dangerous.

Banks, insurance companies, holdings, companies, factories, malls make tons of money fast but spend zero Dirham on the social welfare of the city and its people. Worse, they refuse to pay one miserable dirham to the self-appointed car park guardians, they chase beggars or haggle over the daily wage of poor women cleaners.

For this and more, the city does not seem to have a soul, in the least. With more construction, it is getting bigger and bigger every day but also wilder, aggressive and uglier.

Most of the big businesses of the country are headquartered in this city: banks, insurances, holdings, companies, factories, etc. and has the biggest port of the country. In a word, Casablanca is the capital of business but also the capital of much poverty and despair.

In short, it is the capital of the Golden Triangle  of Morocco where wealth is concentrated has as sample of the Morocco of Despair  in its ranks, but it is, also, the noisiest, ugliest, dirtiest, richest in money but the poorest in compassion, solidarity and responsibility and nobody seems to care about its welfare, aesthetics and functionality.

Business leaders, government officials, be they local or national and even some citizenry do not seem to be concerned, in the least, about improving their city’s lot.

Recently some association, surely sponsored by the government, started a bizarre publicity campaign calling the city WeCasablanca and aiming apparently to highlight or improve the image of this big urban center but only by semantics, not action or deeds.

However, this campaign does not seem to have viable objectives and feasible programs of intervention, it is merely a campaign of self-glorification, empty in meaning and useless in content.

For many Western people the city rhymes with some sort of romanticism represented by the film of Michael Curitz “Casablanca”,  released in 1942, in which a cynical American expatriate Humphrey Bogart (whose famous quotations from the movie remain vivid and eternal quips: “Here is lookin’ at you, kid!” and “Play it again Sam,”)  plays the role of the selfless American white male (Rick Blaine) sacrificing himself for his beloved Ingrid Bergman (Ilsa.)

He runs a nightclub in Casablanca (Rick’s Café) during the early stages of WWII. Despite the pressure he constantly receives from the local authorities, Rick’s Café has become a kind of haven for refugees seeking to obtain illicit letters that will help them escape to America.

But when Ilsa (Ingrid Bergman), a former lover of Rick’s, and her husband, show up to his cafe one day, Rick faces a tough challenge which will bring up unforeseen complications, heartbreak and ultimately an excruciating decision to make.

Humphrey  Bogart says that he came to the city for the waters, but today the costal waters of the city are polluted and so is the air and the city is a pale copy of the one encountered in Rick’s Bar.

In today’s Casablanca.it is all about making fast money even if it takes crossing the red lines of legality. The city is morally corrupt and corruption is the name of the game in its dealings and wheelings. So romantic Casablanca is very much a gross joke today, and the city’s image needs mending badly.

The city has the money but does not seem to have the intelligence, the will and the responsibility to restructure itself and organize its drive to become a bountiful and beautiful urban center of Morocco. Today it looks more like Cairo than Paris.

How can things change:

1- Elect a new local government with a real development plan, selfless spirit and willingness to work hard to improve things;

2- Evaluate the city needs in infrastructure, housing, employment, welfare and put pressure on businesses to sponsor development programs and not just care about making money;

3- Central government must come up with an emergency plan to help develop the city and control the local government’s work; and

4- Link various development programs to an external evaluation and audit scheme whose findings could be used to maintain a given program or drop it and keep a responsible  official in place or fire him.

If this approach fails after ten years, the government has to put the city under the authority of general with a precise and clear development program like what happened with Djakarta, the capital city of Indonesia once upon a time.

Casablanca is a great city with great people, a great potential and needs urgently great decision makers, managers and planners to make it move ahead and not empty campaigns with messages of self-congratulation, like WeCasablanca.

Will this materialize ? only time can show.