Rabat - A 165 million-years-old Moroccan dinosaur tail fossil will be auctioned in Mexico to raise funds for rebuilding Mexican schools destroyed or damaged after the powerful earthquake that hit the country on September 19. 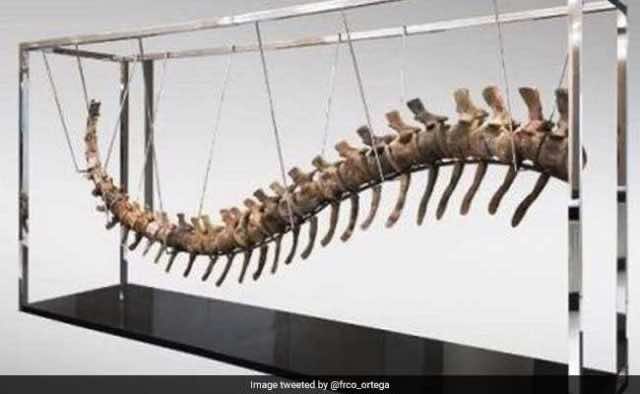 Rabat – A 165 million-years-old Moroccan dinosaur tail fossil will be auctioned in Mexico to raise funds for rebuilding Mexican schools destroyed or damaged after the powerful earthquake that hit the country on September 19.

According to Morton’s Auction House, the 180-kilogram and 4-meter long tail will be sold on January 23, at a reserve price of USD 95,805, approximately MAD 887,000. Any amount above the reserve price will be donated to the BBVA Bancomer Foundation to help fund the reconstruction of some 5,000 damaged schools.

“Education is an element of enormous importance for the country, an element of social mobility, that is why we support the reconstruction of schools,” Adolfo Albo, from BBVA Bancomer Foundation told Reuters, adding that the foundation hopes the tail would sell for a lot more than the reserve price.

The fossil belongs to sauropode of 17 meters and 22 tons of the species Atlasaurus, which once roamed the Atlas Mountains in Morocco 165 million years ago.

Reuters points out that Moroccan paleontologists took 300 hours to clean the gigantic remains of the reptile before Utah scientists rebuilt them.

Last year, the auction house at the Drouot Hotel in Paris put for sale the skeleton of a marine dinosaur originally discovered in Morocco, which stirred much controversy.

According to Spanish news outlet La Republica, the fossils were illegally transported out of Morocco in 2011.

The Moroccan Association for the Protection of Geological Heritage requested the repatriation of the fossils of the 66-million-year-old plesiosaur.

“We will not stay with our hands crossed… This is about our national heritage. There will be an investigation to find out how this fossil, of a species that only exists in Morocco, was able to leave the country,” said the director of Cultural Heritage in Morocco, Abdelá Alaoui on March 2017.

Following a meeting between the Moroccan ambassador to France Chakib Benmoussa and the auction commissioner, Alexandre Giquello, a Drouot representative announced their decision to cancel the sale of the skeleton, which had been priced at EUR 350.000.