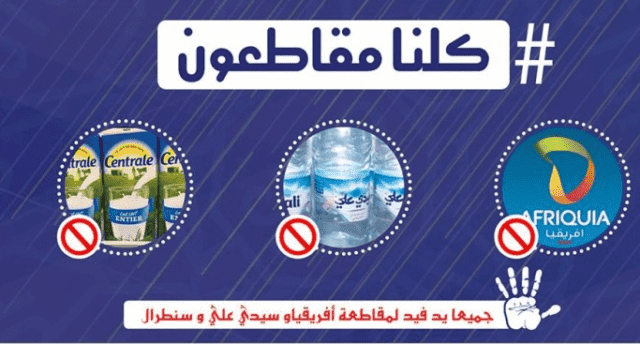 By
Ahlam Ben Saga
-
Ahlam Ben Saga is a Cultural Studies graduate from university Mohammed V of Literature and Humanities in Rabat.
May 1, 2018
Spread the love

Under the slogans “Say No to High Prices,” and “Let it Spoil” (referring to the milk boycott), young protesters first launched the boycott campaign on Twitter and Facebook on April 20. Since then, the boycott has come to embody unified Moroccan citizenship speaking out against rising commodity prices.

Another shopkeeper, was eager to discuss the subject:

“I’m boycotting the three of them [Sidi Ali, Centrale Laitière, Afriquia]. As you can see, there is not a bottle of Sidi Ali or Centrale Laitère in here…Yes, I have a car and I stopped frequenting Afriquia gas stations,” he said. “Now I can assure you that in just a few weeks time, 90 percent of Moroccans will have started to do the same.”

One woman walking with bags of groceries told MWN, “It’s because we remained silent for so long–they took advantage of us.”

After frowning in hesitation, a street vendor agreed with the previous statements: “Yes, I am boycotting because our situation has to change, we’ve had enough.”

Though some citizens were more than willing to state their opinions on the campaign, others refused to participate or asked MWN to vacate the premises upon hearing the word “boycott.”

While the boycott represents the Moroccan citizens’ fighting spirit against “monopoly,” as expressed by many Moroccans, including several celebrities, it also represents significant losses to the company owners.

Moroccan newspaper Akhbar Alyaoum reported on Monday that Afriquia–a subsidiary of the Akwa Group owned by Minister of Agriculture Aziz Akhannouch–has lost a total of MAD 1.46 million (31 percent of all transactions) in its 38 gas stations across the country since the start of the campaign on April 20.

Afriquia owner Akhannouch has been called “the most influential Minister in Morocco, a victim of the boycott,” the Spanish daily El País.

Meanwhile, Centrale Laitère employee in Salé informed MWN that the factory’s products have been rejected by grocery store owners around the region, emphasizing that the administrators haven’t yet decided to reduce prices, despite the fact that they are suffering from major losses. Meetings at Centrale are set for the near future to discuss potential solutions.

Last week at SIAM, Akhannouch commented on the boycott, stating that the current situation of Centrale Laitière does not bode well for the company. The minister explained that the Danone company alone employs “470,000 employees in the sector,” adding that production “will not be stopped by a virtual campaign.”

Secretary-General of the Progress and Socialism Party (PPS) Benabdellah linked the boycott with the Jerada protests for improved government support and social services, which erupted in the northeastern region of the country three years ago and have escalated since late 2017.

As president of the Social, Economic, and Environmental Council, former Minister of Economy and Finance, and current head of the Istiqlal Party, Baraka also commented on the media protest, urging the government to listen to the people’s message conveyed by the boycott.

Mounib, Secretary-General of the Unified Socialist Party, joined the list of Moroccan officials spoke out in protest against the high living cost, identifying the people behind the campaign as young people with a great political conscience.

The boycott remains ongoing, as does the notable silence from the majority of government officials and the boycotted companies.