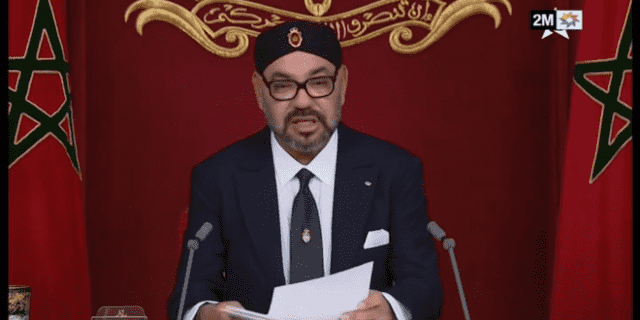 The King expressed his concern over persisting socio-economic disparities that are hampering Morocco’s development and urged citizens to work together to improve social issues.

With Al Hoceima, in the heart of the Rif, having been the site of massive protests decrying social disparities in 2016 and 2017, the King’s choice of venue for this speech was significant.

On the eve of his 19th Throne Day, King Mohammed VI said that he is giving special attention to social issues—echoing previous statements that he has made about disparities between the socio-economic classes.

Despite the progress that has been made in Morocco, the King said that he “cannot but feel that something has been missing in the social domain.”

The monarch sought to reassure Moroccan citizens that their complaints have been heard.

A call for contributions to society and social well-being

The King urged citizens to work together with the government to improve society and social well-being.

“We shall continue to work actively and resolutely in this field and seek to identify and to address weaknesses together,” he stated.

Programs do not meet citizens’ needs

King Mohammed said, “It does not make much sense for more than a hundred social welfare programs of varying sizes to be spread out among several ministries and public agencies, with billions of dirhams earmarked for them.”

The King blamed a lack of “proper coordination” between operators for creating the situation. He added that citizens cannot benefit from these programs if they do not efficiently meet their needs.

“I am not criticizing just for the sake of it. In fact, I consider self-criticism to be a virtue and a healthy phenomenon, so long as words are coupled with deeds and with reform,” he said.

The King called upon government officials to step up and take concrete measures by “restructuring national social welfare programs and policies and submitting proposals for evaluation.”

He also urged the government to reinforce social dialogue, stating that it is “necessary and it should be an ongoing process.” Furthermore, he said, the cabinet should meet more frequently with trade unions, “regardless of the potential outcome of that dialogue.”

Unemployment is a major concern that the government should address, according to the sovereign.

The King stated that citizens can be provided with a more dignified lifestyle and social protection if more jobs and opportunities are offered to them. However, this cannot happen without investment and support for the nation’s producing sector.

The King recommended that the government adopt measures to implement an administrative decentralization plan no later than the end of October. The plan, according to the King, “should” enable the officials to make more effective decisions and implement development programs to help combat social issues.

He also recommended that the government adopt a new investment plan and reform regional investment centers.

Monday is expected to be a significant day for Morocco as the country celebrates the King’s 19th Throne Day.  The King himself will chair a reception ceremony at Tangier’s Marchaine Palace to celebrate his accession to the throne in 1999, according to a statement from the Ministry of the Royal House, Protocol, and Chancery.

The ceremony will begin at 2:15 p.m. Several princesses from the royal family will host a formal dinner in the evening at Marchaine Palace.